(Clearwisdom.net) It has been seven years since the Chinese Communist Party launched the persecution of Falun Gong. Thousands of practitioners have constantly clarified the truth to people, hoping that they can support justice and help to stop the brutal persecution. 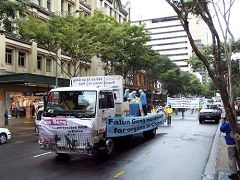 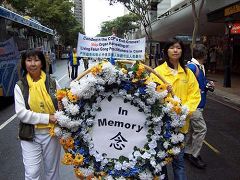 Practitioners clarify the truth and protest the persecution in the rain

The parade ended in Chinatown. Practitioners held an activity there to clarify the truth to more people and collect signatures.

“Canberra, Australia: Falun Gong Practitioners Hold a Candle Light Vigil in Memory of those Who were Tortured to Death (Photos)”

“Munich, Germany: Protesting the Persecution of Falun Gong in Front of the Chinese Consulate”