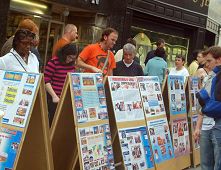 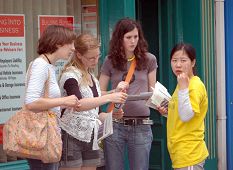 Young girls in Tipperary County listen to the truth

Having known the situation, many local radio stations and newspapers interviewed practitioners, and some asked very detailed questions about the persecution. Practitioners met many kind-hearted Irish people all along the car tour. The Irish citizens were very much shocked about the persecution, and could not understand the organ harvesting from living persons. People signed their names to support the anti-persecution campaign, and also wrote letters to the Irish Prime Minister urging the Irish government to take action to end this persecution.

Practitioners also experienced hardship during this car tour. Sometimes it rained all day, sometimes it was difficult to find accommodations, many times practitioners had no time to eat, and every day practitioners had to travel from one county to another while preparing the truth clarifying materials for the following day. Practitioners made their best effort to do well at each place during the two week tour. Some male practitioners held banners for a long time (Ireland is surrounded by sea, the wind is strong, and holding banners is very laborious), some practitioners demonstrated the Falun Gong exercises, and some were responsible for collecting signatures. Everyone coordinated effectively, which allowed more people learn the truth of Falun Gong.