(Clearwisdom.net) July 20, 2006 marked the seventh year of Falun Gong practitioners’ anti-persecution efforts. Falun Gong practitioners in Sydney held a Great Wall of Truth activity and a press conference to inform the Australian people and the media of the seven-year arduous and peaceful journey of anti-persecution, and call on people from all walks of life to condemn the persecution, especially the atrocities of harvesting organs from living Falun Gong practitioners for profit. Chairman of the Sydney Falun Dafa Association John Dale, famous TV program emcee Steven, representative from the Australian Truth Investigation Committee Jane Sun, and representative of the Friends of Falun Dafa Sandela each made speeches. The activity attracted attention from many passersby who stopped to watch and signed the petition in support. At the same time, Falun Gong practitioners in ten countries in the Asia-Pacific region held a hunger strike appeal to condemn the Chinese Communist Party's (CCP) inhuman persecution. 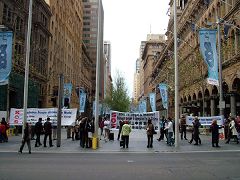 Spokesperson for Falun Gong Kay Rubacek hosted the press conference. She said, "Fourteen years ago, a spiritual belief called Falun Gong was introduced to the public in China, bringing the wonderful principle ‘Truthfulness-Compassion-Forbearance.’ Its sacred and pure teachings were rapidly spread in China, flourishing more than any other spirit in history. Seven years ago, the CCP once again initiated a violent attack on freedom of belief, and ordered the brutal suppression of Falun Gong. Seven years have passed, and as of today, tens of thousands of peaceful men, women, and children have had their whole lives destroyed by the government. People who firmly believe in the guiding principle of "Truthfulness-Compassion-Forbearance" have been slandered, defamed, brutally tortured, killed and had their bodies torn.

Independent findings by former Canadian Secretary of State (Asia Pacific), David Kilgour, and human rights lawyer, David Matas earlier this month, conclude that the Chinese communist regime "...since 1999 have put to death a large but unknown number of Falun Gong prisoners of conscience. Their vital organs, including hearts, kidneys, livers and corneas, were virtually simultaneously seized involuntarily for sale at high prices..." Mr. Matas said "This is a form of evil that we have yet to seen on this planet."

Chairman of Falun Dafa Association John Dale hopes that people passing by will learn more about the persecution of Falun Gong happening in China. He said, "Today, is a special day, on July 20, 1999, (that is to say), today seven years ago, the CCP officially started the persecution of Falun Gong. Now, when you pass by, you may know Falun Gong, or Falun Dafa is a traditional Chinese cultivation practice, it has yoga-like exercise, meditation, and you can practice the guiding principle of ‘Truthfulness-Compassion-Forbearance’ in your daily life. All practitioners who cultivate Falun Gong or Falun Dafa in the world practice the same sets of exercises, and follow the same guiding principle in their daily lives. People in over 70 countries support Falun Gong, and only in China do these people who believe in ‘Truthfulness-Compassion-Forbearance’ suffer persecution."

Representative of Australian Truth Investigation Committee Jane Sun introduced how the live organ harvesting incident was exposed. She said, "In March this year, a journalist who fled from China first exposed that China’s concentration camp arrested Falun Gong practitioners, harvested their organs for transplants to make huge profits, and ultimately caused death of Falun Gong practitioners. This horrible allegation was verified by the second witness who was an ex-wife of a surgeon directly involving in organ transplantation operations. After that, the third witness, a Chinese military doctor confirmed that these allegations are true. He pointed out that in China, there is not only one concentration camp, but more than 36 of them, which are all controlled by the military system."

Well-known program emcee in Sydney Steven said in his speech that people in the world all know that the weapons are dangerous, but the most dangerous weapon is trade. The CCP uses trade to influence western freedom and democracy, so that they remain silent over China’s human rights issues.

A representative of practitioners who participated in the hunger strike appeal said in a statement, "We seriously hold a hunger strike—not only for the fellow practitioners in mainland China who suffer persecution for persisting in their belief, but more for awakening people’s conscience, awakening Chinese people who have been deceived by the CCP, and awakening organizations and individuals who compromise with the evil party for temporary vested interest."

A wall of banners and display boards that lined the streets forming a Great Wall of Truth attracted attention from many passersby. An Australian girl cried after learning about the suffering of Falun Gong practitioners. She said in an interview, "How can these people harvest organs from living people only for money. It’s too cruel."

Ms. Li Ying, who once served a two year term in a forced labor camp in China for persisting in practicing Falun Gong, said that July 20 is a day that all Falun Gong practitioners will remember forever. She said, "In the past seven years, though the CCP has exhausted all means possible to carry out an inhuman persecution against Falun Gong practitioners, it fails to make Falun Gong disappear from the scene. Instead, people around the world all have learned the meaning of Falun Gong 'Truthfulness-Compassion-Forbearance,' more and more people have denounced the CCP brutality, and more and more people have quit the CCP and its affiliated organizations. Today, I came to the Chinese Consulate, not only for participating in protest activities, but also hoping to awaken the conscience of the CCP officials who have learned about the CCP’s evil nature. The more people who quit the CCP, the closer the CCP comes to its disintegration, and sooner the persecution of Falun Gong will be stopped."

After the activities concluded in the downtown area, Falun Gong practitioners assembled outside the Chinese Consulate to join the hunger strike protest against the CCP atrocities. They hope that people from all walks of life will pay attention to the persecution that has persisted for seven years. They also hope that the officers in the CCP Consulate take as an example the former first secretary Chen Yonglin, see clearly the CCP’s evil nature, no longer assist the tyranny in doing evil deeds, and join the efforts to stop the most tragic and inhuman persecution in human history.