(Clearwisdom.net) At 10:00 a.m. on July 20, 2006, Falun Gong practitioners from Macau gathered at a famous tourist spot to clarify the truth of the persecution of Falun Gong to tourists. 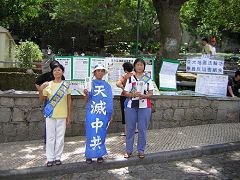