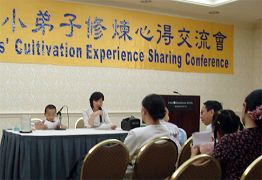 The cultivation experience sharing conference for young practitioners began with young practitioners’ recitation of Lun Yu [Preface of Zhuan Falun] and reading of some of Master Li's lectures. The youngest practitioner was only two to three years old, and the oldest is in middle school. They shared their experiences over the past few years, including the improvements they have made in studying the Fa and doing the exercises, the attachments they have let go of, and the other attachments they still have. They exposed those attachments and were hurrying to eliminate them. What was precious was that they also shared how they clarified the truth to their teachers and classmates at school. Young practitioners are assimilating to the universal law, "Truthfulness-Compassion-Forbearance" through cultivating in Falun Dafa.

Twelve-year-old Huang Jingyi had an unusual experience. She started practicing Falun Gong when she was living with her grandmother in China. Once, a bicycle ran into her and her body turned in a circle with the bicycle. The people surrounding were shocked, but as she stood there steadily, nothing happened to her. She said she kept in mind Master Li’s teaching in Zhuan Falun. She knew it was a test. She came to America last year, and studies the Fa and does the exercises every day. She often goes to tourist sites in Washington with her grandmother to distribute truth clarification materials. Young as she is, she has walked quite far in the path of cultivation in Falun Dafa.

Six-year-old Wang Zhen has a variety of ways to study the Fa: reading, reciting and transcribing the Fa. At the beginning, she transcribed several words per day, but now she can transcribe one page per day. She once went to the Congress with her mother during her spring holiday to clarify the truth. Her mother told her that she represented the voices of young fellow practitioners who are suffering persecution in the mainland. She was very brave and did quite well in truth clarification.

Five-year-old Nathan told everybody that he was fond of play before, particularly he liked to play computer games, and from time to time, he would get angry. After learning Falun Dafa, he is no longer wants to play all the time, and also no longer so easily gets angry. His xinxing has improved a lot, he can get along well with his friends, and is ready to share his toys with other children.

According to Nathan’s mother, Nathan was plagued by eczema since he was young, which was too itchy and painful to tolerate. After practicing Falun Dafa, his mother touched his smooth skin, and could hardly believe it was her son’s legs. Since Nathan’s mother practiced Falun Dafa, the airborne allergy that had plagued her for years was cured without any treatment. Now the whole family practices.

Other than experience sharing, the organizers invited host Li Rende from the English teaching program "Hello" on NTDTV to tell stories to the children and teach them to draw pictures.

"Lotus flowers have blossomed in over sixty countries,

Over sixty countries love them.

Falun Dafa, has been spread everywhere in the world,

I want to plant lotus flowers one by one."

The song reflects the concerns of these young disciples. The Washington DC Minghui School organized this dance team last year for rescuing persecuted Falun Gong children in mainland China. They used their own money to invite professional teachers to teach them. In the past year, they have participated in community performances on multiple occasions. Facing the audience, they changed from being timid to smiling calmly, gradually becoming more mature.

The fourth Falun Dafa Young Practitioners’ Cultivation Experience Sharing Conference came to a successful conclusion. The parents commented that it was a good opportunity for young practitioners to compare with each other in their cultivation and learn from each other. Everybody was glad to have attended the experience sharing conference and agreed to meet again next year.