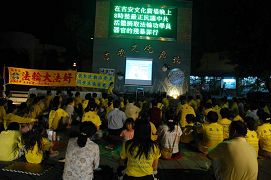 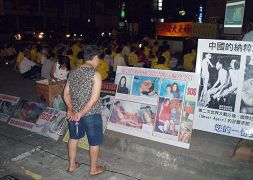 A passerby is looking at the truth-clarification posters.

Hualian County Council Member Liu Xiaomei was in Taipei, so her office director, Mr. Lin Chenglong, came to express her support and concern. Ms. Liu stated that she strongly condemns the Chinese Communist Party's crime of organ harvesting from living Falun Gong practitioners to sell for profit. She admired Falun Gong practitioners' courage to step forward and said that she was willing to provide help. She also called on the people of the nation to condemn the Chinese Communist Party and asked the media to educate the people of Taiwan about the risks and inhuman behavior involved in organ transplant surgery in Mainland China. Office Director Mr. Lin also expressed his support of Falun Gong.

Director of Ji'An Township Mr. Tian Zhixuan not only provided the place and equipment for the activity at no charge but also attended the candlelight vigil to show his support. He promised to provide help whenever needed.

Hualian Falun Gong practitioners call on the world's governments, international organizations, and righteous people to join or support the Coalition to Investigate the Persecution of Falun Gong and pressure the Chinese Communist Party to open all forced labor camps, prisons, brainwashing centers and involved hospitals for an independent investigation, and end the CCP's persecution of Falun Gong.

“Ukraine: Falun Gong Practitioners Clarify the Truth in a Park in Kramatorsk (Photos)”