In the year 2000, China had less than 100 hospitals that could perform organ transplants, while in 2005, more than 500 hospitals were carrying out liver transplants alone, according to Huang Jiefu, the deputy minister of health. Chen Zhonghua, head of the Organ Transplant Research Institute at Tongji Hospital in Wuhan City said, "In economic terms, we are a large country for organ transplants. Lots of foreign patients come to China for donor organs." The growth of the organ transplant market stimulated the sale of immuno-suppressant medications. According to statistics provided by South Medicine Economy Research Institute, trade in the immuno-suppressant drug market currently is about 10 billion yuan. 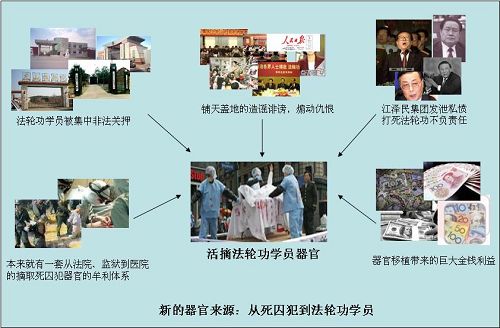 There are two facts that the CCP can't deny: first, the explosive increase in human organ supply in recent years, and second, it cannot come up with a legitimate source for all of these organs.

Most people think that the CCP harvests organs from executed inmates. In early March 2006, however, a new organ source was exposed abroad.

On July 6, 2006, two Canadians, international human rights lawyer David Matas, and former Member of Parliament and Secretary of State in charge of Asia and Pacific affairs David Kilgour, published a report summarizing the results of their two month independent investigation. The report concludes that the CCP has been harvesting organs from living Falun Gong practitioners.

This is an important point, because it shows Falun Gong practitioners are another highly probable organ source.

Whether the organs actually come from executed prisoners or (at the same time or more) from Falun Gong practitioners, in view of the fact of the persecution of Falun Gong, Gresham's Law, a economic principle, can help us reach a more logical conclusion.

Gresham's law is commonly stated as, "Bad money drives good money out of circulation." A more correct rendering of Gresham's Law is that "Bad money drives out good if they exchange for the same price." This law was first formulated by Nicolaus Copernicus.

During this persecution, Falun Gong practitioners, good people who follow "Truth-Compassion-Tolerance" were demonized and labeled "bad money." After decades of CCP atheist brainwashing, many people can no longer accept any belief based on the existence of God, as they have been taught to think of it all as feudalistic myths, for fools. The CCP's defamation of Falun Gong even labels practitioners as "suicidal," "murderers," "self-immolators" and as "psychotic." The propaganda has generated tremendous hatred of Falun Gong among the masses, who, victims of the overwhelming propaganda, are unable to form independent thoughts or concepts. Later, the CCP accused Falun Gong of "disrupting social order," of being an "anti-China force" and an "antirevolutionary organization," among other political labels, which fuel even more hatred.

An inmate who is not a Falun Gong practitioner told me a story that left me an indelible mark on my heart. An older Falun Gong practitioner refused to give up his belief and held a hunger strike to protest the persecution. He was tossed out in the hallway. The guards walked about him back and forth as if he didn't exist. He curled into a ball and wasted away while people turned their backs. Several days later, all life finally left him and he was carried out and dumped. It was the end of a life! The coldness and contempt for life that CCP officials in this story emit virtually suffocated me.

Police beat to death a college student who forgot to bring his temporary residence permit with him. His death triggered a storm on the Internet during which waves of condemnation targeted the guilty police officers and the shelter system. This is merely one example of what this despotic regime is capable of, and sad as it is, there are even fewer voices heard that speak to the catastrophic massacre that affects millions of innocent Falun Gong practitioners in China. People don't believe the persecution is happening! Facing the charges of these live organ harvesting incidents, simply because the plaintiffs are presumed Falun Gong practitioners, many people blindly deny its existence without conducting any investigation. Their denial itself is the huge umbrella of protection under which the persecution is able to exist and continue.

Falun Gong practitioners are deprived of their basic human rights; good people are pushed down to the rock bottom of society. The CCP smeared and distorted good people's reputations as "bad money." In the CCP's eyes, their lives are totally worthless.

Yet, when the CCP officials realized that selling practitioners' organs could bring tremendous wealth, an even more horrifying disaster began.

Regarding the taking organs from the death row inmates, firstly, according to the CCP's "Temporary Regulation on the Utilization of Executed Prisoners' Bodies and Organs," only "those whose bodies are not claimed, whose families refuse to take it, when the death row inmates are willing [to donate their organs] or their families agree for their organs to be used--these bodies and organs can be utilized." Although the CCP actually does not follow its own regulation, this rule still exists and it has potential to make trouble to them. Secondly, the CCP is under great pressure from the international community for using death row inmates' organs. The CCP has always been condemned for taking prisoners' organs without consent. Thirdly, there have been several media reports of executed prisoners' families suing the government for stealing organs. In other words, compared to "worthless" Falun Gong practitioners, the cost of the organs from executed prisoners who are regarded as "good money" is much higher.

In contrast, the CCP found that harvesting organs from Falun Gong practitioners is more convenient and safer. The organs are taken directly from living bodies. The success rate of any organ transplant depends on the quality of organs and the interval of time between cutting off blood circulation and the transplant surgery itself. The CCP butchers discovered that harvesting organs from living Falun Gong practitioners solves both problems completely.

Gresham's "bad money drives out good money" principle is thus at work here. In this case, the "bad money" presents a higher market value than "good money." Harvesting organs from live bodies, something that rarely happens in the case of prisoners to be executed, has been happening to many, many young and healthy Falun Gong practitioners during the CCP's inhumane persecution of Falun Gong.