Vancouver: Rally and Parade Held to Expose the CCP's Live Organ Harvesting and Call on the Canadian Government to Take Action (Photos) 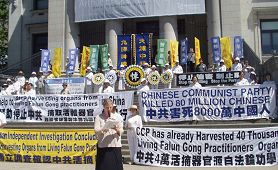 Former MP Simma Holt, who is a veteran reporter with 30 years of experience, made a speech at the rally. She repeatedly thanked Falun Gong practitioners, saying that Falun Gong practitioners are speaking on behalf of all free people in today's world. When the crimes of killing human beings are happening, nobody is safe. The (CCP's) persecution of Falun Gong and live organ harvesting constitute the crime of genocide in this new era. As a reporter, she strongly called on the media to take a positive role in exposing the evil.

A representative of the Province of British Columbia General Union, Fred Muzin, on behalf of 1100 subordinate unions and 470,000 employees, made a speech. He expressed that we can absolutely not remain silent facing crimes of mass killing of human beings and human organ harvesting for profit. The General Union has been calling on all kinds of human rights groups. Today, he would like to stand with Falun Gong practitioners to call on the Canadian government to not allow trade to override human rights, morality and justice. He also wanted to know about the sources for organ transplant and stop the crime of live organ harvesting. Mr. Muzin appreciated Falun Gong practitioners' courage and unremitting efforts for justice and dignity.

Mr. Muzin said that the members of Parliament will continue bringing forward the live organ harvesting incident at the parliament, and request the government to take action, and at the same time we should also do a lot of work to let MPs, citizens and the public learn about the current evil happenings in mainland China.

MPs from three Parties wrote letters to express their support for the rally, and concern over the CCP's harvesting organs from living Falun Gong practitioners.

Bill Silsay from the New Democratic Party said that he was deeply disturbed by the report recently released by former MP David Kilgour and human rights lawyer David Matas. Their report requested the Canadian government to take measures to stop such crimes from continuing. He expressed that MPs of the New Democratic Party requested the United Nations, Amnesty International and other organizations to continue conducting investigations into this matter without any interference, and called on the Canadian government to exert pressure on China to immediately stop these atrocities.

MP Nina Grewal from the Conservative Party said in her letter that we cannot accept live organ harvesting. The Conservative Party government is substantially and carefully looking into these allegations. Foreign Minister Peter Mackay has requested the United Nations, human rights organizations and countries sharing the same intention to work together to conduct the investigations.

Ms. Grewal said that their position is clear: all persecution against Chinese Falun Gong practitioners should be stopped immediately, and investigations should be conducted into the allegations of live organ harvesting.

After the rally, participants held a grand parade. From downtown to Chinatown, the parade procession was solemn and serious. Falun Gong practitioners dressed in white suit, and all parade participants wore white flowers in front of their chests. Former MP Simma Holt and representative of Province of British Columbia General Union participated in the parade from beginning to end.

Many people in Vancouver learned about the investigative report from TV reports. Seeing the parade, they looked very serious, took the material and silently stood at roadside watching the parade procession march by. Chinese people in Chinatown, in particular, had obvious changes in their attitudes. They no longer had an indifferent attitude towards a Falun Gong parade, but watched attentively as the parade procession passed by.

“This Time I Achieved Forbearance”