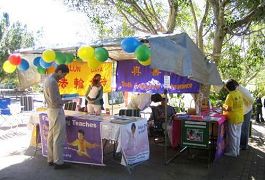 Practitioners set up a booth in the World Environment Day

On June 4, 2006, practitioners from Queensland, Australia participated in the World Environment Day event held annually on the Sunshine Coast.

It was sunny and pleasant that day in Queensland, where the winter season had just arrived. Practitioners repeatedly demonstrated the exercises for the entire day at the event. Passerby stopped in front of the booth and learned about the facts. In addition to requesting reading materials, visitors also signed the petition to oppose the Chinese Communist Party (CCP)'s brutal persecution of Falun Gong, and they condemned the CCP atrocities of stealing organs from living practitioners. After learning the cruel persecution that practitioners have been suffering in China, a lady said, "I won't feel that anything is scary from now on, since there is nothing worse than this (persecution)!"

Local TV Station 7 came and interviewed practitioners at the booth.