Hsinchu County, once known as "Zhuzhe" in ancient times, is home to the former minority group of Taiwan known as the Pingbu. In Chinese, Zhuzhe literally means "a castle built from bamboo poles." Because of its geography, the Hsinchu region experiences very strong winds, and hence Hsinchu was also known informally as the "Wind Castle." The strong northeast seasonal winds became an important part of the flour-making process. It is therefore no wonder that Hsinchu County is well known for its flour exports. The well-known Taiwanese science park, scientific and industrial districts, Industrial Research Institute, National Tsing Hua University, and Jiaotong University are all found within Hsinchu County. Over time, modern technological progress and urbanization has gradually replaced the glorious history of this well-known county and left it behind.

1. The Beginning of Falun Gong in Hsinchu

In early 1999, the first Falun Gong practice site was set up at the Zhushi Practice Elementary School. That same year, when the persecution of Falun Gong began in Mainland China, the first large-scale group exercise was held in the large square in front of the Confucius Temple in Hsinchu. From then on, the spread of Falun Gong and its popularity began. After the first group practice, two new practice sites were set up in front of the Confucius Temple, where practitioners could practice at 7:30 every night and also teach any interested passers-by free of charge. There are 13 nearby towns under the jurisdiction of Hsinchu County. Before 1999, there were less than 10 practitioners in the entire region. As of now, there are more than 10 practice sites in these towns, for a total of 40 to 50 practice sites in total, including Hsinchu County itself. For Fa-study, the first study group was set up in a practitioner's home. When practitioners began to realize the importance of the Nine-Day Classes and study groups, a few practitioners in Hsinchu County used their own money to rent a location and donated it for the purpose of holding Nine-Day Classes and study groups. Today, most practitioners meet at the practice site beside the Mingzhi Library to practice the exercises, study the Fa, share experiences, and also send forth righteous thoughts.

2. People with Predestined Relationships Come One After Another 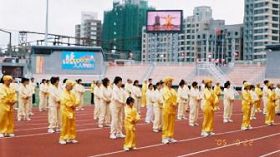 Some practitioners got to know of Falun Gong from their relatives and friends; some have simply seen practitioners doing the exercises at practice sites and decided to join in; others have found the book "Zhuan Falun" on sale in the bookstores and began to practice after reading it--there are many stories indeed. Many of them have come to realize the true meaning of life through cultivation and have obtained tremendous improvements in physical and mental health. In the community of practitioners, there are elderly seniors, young children, and teenagers, as well as adults; there are housewives, senior governmental officials, soldiers, policemen, laborers, farmers, businessmen, entrepreneurs, artists, physicians, professors, doctors, and members of religious organizations--people from all walks of life. Mr. Luo Ciqin, principal of a local elementary school, mentioned in one of his cultivation experience sharings that all of his incurable diseases were healed after he began practicing Falun Gong. His liver disease (on which he had spent lots of money looking for a cure) was also healed completely. Other problems like a swollen thyroid gland in his throat due to years of allergic coughing also healed within a month and he no longer has difficulty swallowing. These are all real-life examples and validations of the cultivation experiences of Falun Gong! As a result, Luo's wife also became a cultivator six months later. Another practitioner used to be so hot-tempered that people called her a "small chilli." Before cultivation, she was also known as a "drug bottle," nicknamed "Lin Daiyu" for taking a lot of medicine. As a worker in a hospital, she knew that her illnesses could not be cured by western medicine, and neither did her visits to several qigong and massage therapists work. After she began cultivation, her mild temper and improvements in physical health made all her colleagues exclaim, "Falun Gong is simply wonderful!" Mr. Liu Yinggu, a Chinese acupuncture physician who had already obtained a license to practice in the U.S., also travels back to Taiwan frequently to volunteer his services to people. However, he himself was plagued with many illnesses. Diabetes made him face the possibility of having his legs amputated, and a tumor also began growing in his prostate. After seeing countless western and oriental physicians, he still could not find any cures. On the contrary, his health deteriorated and he had to take increasing amounts of drugs everyday. Trying to cope with such pain and agony, Mr. Liu wanted to commit suicide many times.

Studying the Fa and sharing with fellow practitioners is one of Liu Yinggu's (first from the right) happiest moments in life. Picture taken in 2005.

In the summer of 1999, Mr. Liu's sister introduced the book Zhuan Falun to him. Immediately sensing the profound truths of the Fa-laws in the book, he was filled with joy and began learning the exercises by himself from videotapes. After six months or so, he finally said goodbye to the drugs that had accompanied his every single day for more than 40 years. In order to pass on this great practice to others, he set up a practice site in the Zhubei National Elementary School and began teaching the practice voluntarily to anyone who came. He has also gone to the Hsinchu County government to tell the government officials about the goodness of Dafa, and was received warmly. For Mr. Liu, seeing people with predestined relationships obtain the Fa, start to cultivate, and help each other on their way to return to their true selves is the happiest thing in his life!

3. The Founding of the Falun Gong Social Group in the Industrial Research Institute 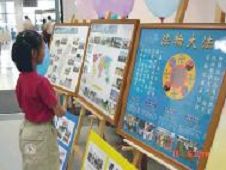 A light of hope for scientists and researchers

The Industrial Research Institute in Hsinchu is one of the giants in Taiwanese research and development, with more than 6,000 workers mostly comprised of scholars with Masters' or Ph.D. degrees. Engineers in the institute have to work long hours each day and physical health has thus become of great concern. Cultivation in Falun Dafa allows for cultivating both character and body, and practitioners can improve their physical and mental health. It is no wonder that the practice is so well received and practiced by workers in the institute. 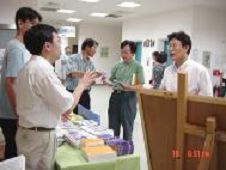 In 2002, the Falun Gong Social Group was founded in the Industrial Research Institute. At that time, practitioners used to gather every weekday at lunchtime to practice the exercises and study the Fa. In order to help the busy workers in the institute understand the story behind the persecution of Falun Gong, a "Cherish Life and Halt the Persecution" activity, as well as torture exhibits, was held in the institute. Torture exhibits included force-feeding, inserting sharp bamboo poles into the nails, a Tiger Bench, etc., with real life people portraying the truth of the persecution in China. Many colleagues and passers-by were attracted to the display and stopped to find out the story. Some were surprised and sympathetic, while others found it to be too inhumane. One worker exclaimed, "It (the Chinese Communist Party) is a black society!" Some also expressed their wish to practice Falun Gong and said, "This persecution (of Falun Gong) is a terrible policy!"

The popularity of Falun Gong in Hsinchu County is evidenced by the numerous Falun Gong classes, the large group practices, and other activities during many elementary and middle schools' celebration events. An elementary teacher, Ms. Ye, thought that Falun Gong was so wonderful that she included the practice in her classes in school. She began to teach her young students how to be good people that do not lie, that do truthful things, that always think about others, and that are compassionate. Ms. Ye is also in charge of holding Falun Gong classes for teachers throughout the region. 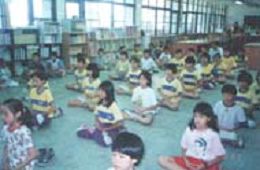 Ms. Ye brings approximately 80 children, ranging from grade three to grade five, to practice the exercises and study the Fa at lunchtime every Tuesday and Thursday. On Saturday mornings between 8 and 11 she also hosts classes and practice sessions where she invites parents to join their children in practicing Falun Gong. With the advent of the practice sessions and the welcome she received from the school authorities, a winter camp was held and more than 50 people registered. The children began studying the Fa and doing the five sets of exercises. The entire event was eventually approved by all the parents.

(1). Positive Changes in the Children

One child was hyperactive and severely mentally disabled. He could never sit still during class and none of his classmates liked him. In fact, they always made fun of him and bullied him. None of them were willing to make friends with him. After Ms. Ye presented a few stories on the principles of "Truthfulness, Compassion, Forbearance" to the children, everyone in the class began helping this child out willingly and never again bullied him. These children's actions improved tremendously. Another student used to have a very bad temper and would often use vulgar language or even fight with other students. However, shortly after he heard a few stories about the principles of "Truthfulness, Compassion, Tolerance," his attitude changed 180 degrees. He stopped using bad language and fighting with other students. He became so deferential and polite that all his other teachers were stunned. Even more miraculously, all the students seem to have become brighter--they were able to memorize the entire "Da Xue" and "Zhong Yong" sections in the book Xue Yong Lun Yu. The school principal recommended that more students participate in this activity and encouraged them to practice the exercises and study the Fa on alternate days. In the end, all the students became polite, never scolded others, never fought with each other or stole things from each other anymore. In fact, they would even finish every single grain of rice on their plates at each meal! Ms. Ye said that Falun Gong has enabled these children to be able to grow and learn in a pure environment. Falun Gong has taught the children to restrain themselves and think of others, and has truly made it possible for them retreat from the pollution of violence and sexuality in modern society and return to their true selves.

(2). Highly Affirmed by the School Principal

All this time, the school principal has been very enthusiastic about the Falun Gong class for teachers. When he learned of this event, he invited five professors, one lawyer, and three doctors from all over Taiwan to come support it, although they were not given any travel or food reimbursements. It was the best and most powerful Falun Gong class for teachers that the principal had ever seen!

“My Humble Insight on Educating Students about Life”

“Having No Attachments or Omissions, Reaching Consummation and Following Master Back Home”