(Clearwisdom.net) Chairman of the Chinese Communist Party's (CCP) Political Consultative Conference Jia Qinglin arrived in Hong Kong on June 27, 2006 for a three-day visit. Hundreds of people from different groups and organizations including Falun Gong, the Hong Kong Alliance in Support of Patriotic Democratic Movements in China, April 5th Action and Frontier protested with banners and signs. Falun Gong practitioners called for the end of the persecution and bringing Jia Qinglin, Bo Xilai and other chief perpetrators to justice. 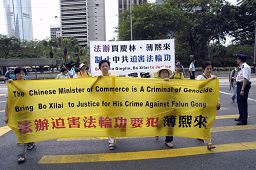 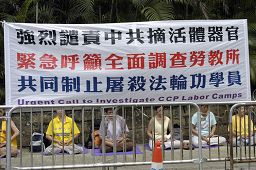 Falun Gong practitioners read aloud an open statement: "Hong Kong is dishonored in these days because politicians and VIPs would probably shake hands with a person that owes debts of blood for the brutal persecution of innocent people. In a society that advocates morality and is ruled by law, handcuffs are what should have greeted the criminal' hands."

The statement also pointed out the serious persecution of Falun Gong in Beijing and Liaoning Province, where Jia and Bo were governing and actively following the persecution policy of Jiang Zemin's regime. These two chief perpetrators had been sued in many countries for genocide, torture and crimes against humanity.

The statement said that Bo Xilai was in charge of Liaoning Province when the crime of harvesting organs from living Falun Gong practitioners happened in Sujiatun Concentration Camp. Bo cannot shirk his responsibility. Falun Gong practitioners called for the international community of form a joint investigation team to conduct a complete, independent investigation. They hope that facts of the persecution will be exposed and the seven-year-long persecution will be stopped soon.

International investigation organizations had pointed out that Jia Qinglin actively cooperated with the persecution of Falun Gong since it was launched on July 20, 1999. He was directly involved in crimes of illegal detention and torture of Falun Gong practitioners when he was in the position of Secretary of the Party Committee in Beijing. He is one of the chief perpetrators of the persecution. Since September 2004, he has been sued for genocide and torture in Austria and Spain.