(Clearwisdom.net) On May 30, 2006, on the first scheduled meeting of the 16th council, Hualien County Council, Falun Gong practitioners appealed to the council to condemn the Chinese Communist Party (CCP)'s atrocities of live organ removal. The CCP's crimes against practitioners imprisoned in concentration camps and labor camps violate human beings' safety and human rights. The practitioners hoped that the Hualien County Council would send the strongest condemnation to the CCP. 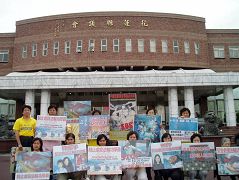 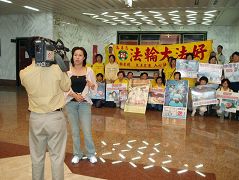 Falun Gong practitioners said that Falun Dafa teaches practitioners to follow Truthfulness-Compassion-Forbearance and has benefited one hundred million people across the world. The CCP, however, unlawfully imprisons practitioners, harvests organs from living practitioners for profit, and cremates their bodies to destroy evidence. Such brutal atrocities are inhumane. In mainland China, since the persecution started on July 20, 1999, at least 2,890 practitioners have been tortured to death, hundreds of thousands have been illegally sentenced to labor camps, and countless more are missing.

2. Requesting the Department of Health in Hualien County to direct and help medical professionals establish ethical rules for directing patients to get organ transplants in mainland China.

The practitioners' efforts were covered by newspapers and TV stations. The proposal is currently being co-signed by Hualien Council members.