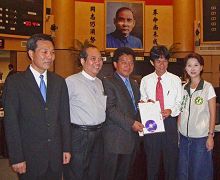 “Ukraine: a Series of Truth Clarification Activities During the Ukraine Fa Conference (Photos)”