(Background information: The following testimony [see photos] is an extraordinary court defense statement written by Dafa disciple Ms. Ji Guoyuan. This statement that clarified the truth and validated Dafa in court, along with the two other documents that exposed the evil persecution, were written when Jiang headed the Chinese Communist Party. It was written when Mainland Dafa disciples were being illegally arrested, jailed, tried, and having all their personal rights stripped away. It was written in a place without paper, pen, or ink, under tight, 24-hour surveillance. At the risk of an illegal sentence or even loss of life, it was written in detention with an oil brush on toilet tissue.)

The day the court opened, Ms. Ji Guoyuan used wisdom bestowed by Dafa to break through body searches and other illegal inspections to bring her statement to court in order to reveal the truth and validate Dafa. Its power shook the evil, and astounded the spectators. It enabled many people present, including inspectors, judicial, administration officers and lawyers, to understand the truth.

Ms. Ji Guoyuan read the truth about Falun Dafa, exposing the evil persecution. She turned the courtroom into a righteous setting where Dafa disciples validated the Fa and exposed the evil committed by Jiang Zemin and his malicious accomplices. After completing her declaration of innocence, Ms. Ji personally presented her defense statement to the presiding judge. The jury staff, secretary, and police officers present in the courtroom immediately came forward to see it and even said, "What is written here is calligraphy. It is is putting Jiang Zemin on trial! We dare to read [the words] but don't dare to speak [them] aloud."

In spite of risk to her personal safety when the evil was at its worst, Ms. Ji Guoyuan, who was in a most difficult situation, still followed Master's teachings. While she clarified the truth and saved sentient beings, her compassionate and total forbearance deeply moved the people present.

After the court recessed, several court officials took Ms. Ji and her husband to an office and chatted with them for two or so hours. They asked them questions to further understand the truth of the matter and asked some questions regarding cultivation practice. Ji Guoyuan answered them one by one.

Noon came, and several court police had to deliver Ms. Ji back to the prison. During transit, she recited Master's Lunyu for them to listen to the whole trip. They said with regret, "You never met Teacher Li, and Teacher Li isn't here. Under the current situation, you are still firmly devoted to Falun Gong; this Falun Gong is really great! Teacher Li is really amazing! Just relying on this, we will for sure find Zhuan Falun and read it carefully."

When it was time for the police to leave, Ms. Ji repeatedly urged them to keep righteous thoughts for Dafa and to remember as a motto: "Truthfulness-Compassion-Forbearance are good, Falun Dafa is good," and also to tell their family and friends and everyone around them. She hoped they would choose a beautiful future for themselves.

After the trial, Yingze District Court, Tianyuan City Mid-Level People's Court and Shanxi Province Superior People's Court all intended to deliver the same verdict of innocence. However, because the province and city 610 Office interfered and illegally leaned on these courts, they never legally declared her innocent. The 610 Office even required a so-called "Guarantee Statement" as the release condition. Otherwise, they wouldn't let Ji Guoyuan go. Seeing that she never wavered, the provincial 610 Office once again made the lawyer pass on the word: "If you promise not to publicize Falun Gong, the provincial commission will send a car and have the provincial 610 Office deputy director personally escort you back to work."

Because Ms. Ji wouldn't compromise, she was jailed in the Taiyuan City Prison for a year and four months. In that time, she and her family requested many times her immediate and unconditional release through their lawyer. They also reported to the National People's Congress, the Politics and Law Committee, and the inquiry departments the unlawful criminal conduct of illegal arrest and imprisonment of Dafa disciples. They also requested an investigation of related departments and staff. A year and four months later, the provincial 610 Office once again disregarded the constitution and related laws. On March 26, 2002, when a court investigation threatened a repeal of her lawsuit, the authorities instructed the Taiyuan City Labor Camp Administration Committee to imprison Ms. Ji for three years beginning April 28, 2002.

Such a document--mere words on a piece of toilet paper in defense of and validating Dafa and exposing the evil persecution--is very hard to come by. From the prison to the labor camp to long periods of illegal imprisonment, Ms. Ji Guoyuan protected her writings day and night. She has already endured repeated surprise attacks of search and confiscation, including barbaric body searches, having her bags searched and her clothes torn, and other illegal inspections. With Master's compassionate protection, support, and help, miraculously her writings were kept completely safe. In addition, from the prison to the labor camp to the interview, there have been many setbacks, yet layer upon layer of interference have been broken through, and the document has finally gotten out. (March 2006) 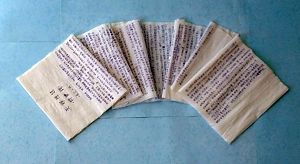 1: Ms. Ji's defense statement written on toilet paper (her declaration of innocence), an image of the original 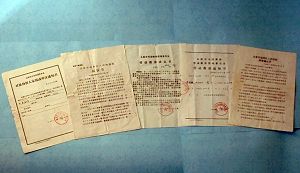 Â 2: An image of the document exposing the evil persecution of Dafa disciples