(Clearwisdom.net) It had been raining hard for several weeks in Taiwan. In the morning of June 11, 2006, it became sunny. More than 600 Falun Gong practitioners from the Mid-Taiwan area were assembled in the Douliou Elementary School in Yunlin County to hold a group Fa-study and experience sharing. During the event, every practitioner looked inward for his or her own shortcomings in cultivation, and encouraged each other to do well the three things—study the Fa, send forth righteous thoughts, and clarify the truth—in daily cultivation. 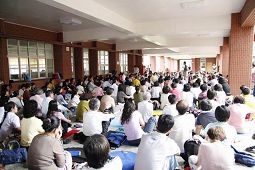 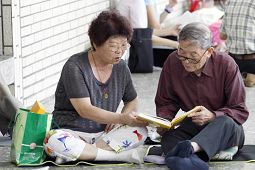 Practitioners studied the Fa and shared experiences in small groups in the morning, and in the afternoon, they shared cultivation experiences in a big group. They studied Zhuan Falun, Essentials for Further Advancement and new articles from Master. The contact persons in the Mid-Taiwan area shared Master’s special teaching for practitioners from Taiwan during the Fa conference in Canada. In the special teaching, Master said that practitioners from Taiwan should communicate and share with each other more often, get rid of human notions and attachments, and do well in cultivation.

Taiwan is a free country, where everybody can freely support any political parties. Political topics are very common in newspapers and in daily life. But cultivators should not be attached to politics or be moved by it and forget his or her mission. In such an environment, practitioners from Taiwan should not be moved by the political situation and one’s own political preference. Practitioners should rationally clarify the truth to everybody no matter which party the everyday person belongs to.

During the sharing, several practitioners said that they thought they didn’t have any attachment to the political parties before. But after they looked inward deeply, they found that they not only had it, but were strongly attached to it. They realized that they cannot save sentient beings with such a human heart, which can be moved by the external environment. One practitioner shared her experience of cultivating speech, making her will solid and purifying her heart by intensively studying the Fa.

Practitioner Mr. Hou said that he became a member of the Chinese National Party (Kuomintang) in high school. He was a representative in Kuomintang and awarded by it. In college, he became fond of The Democratic Progressive Party (DPP), and in graduate school, he studied socialism. He obtained the Fa in 2000, but he was like the person that Master mentioned, who stepped into Dafa but didn’t really obtain it. In his heart, he knew that he would have to make a decision sooner or later. It was difficult for him to put down all the attachments to fame, money and qing, when he tried to put down his fame in the academic community. After The Nine Commentaries on the Communist Party published, he didn’t want to face it. He didn’t put down the attachment to socialism until he had a chance to read The Nine Commentaries on the Communist Party. He said that, in this special period, in order to complete the holy mission, practitioners must put down their notions and attachments.

A practitioner, who is a professor in college, said that he is a member of Kuomintang. It was really hard for him to clarify the truth to DDP congressmen two years ago. He found it very hard the first time. Later, with other practitioners’ righteous thoughts and support, the difficulty was gone gradually. His understanding is that the practitioners’ task is to save people, and we don’t have the right to choose and determine who should be saved.

Ms. Ye said that she had conflicts with a practitioner for three years because they supported different political parties. She apologized to that practitioner after she came back from Canada. After communicating with each other, the conflict, which lasted for several years, was gone.

A practitioner from Yunlin County, who obtained the Fa two years ago, talked about her current cultivation status. She didn’t pass a test, so she wanted to share her experience with everybody. She works in a hospital. One day, a salesman came to her hospital and tried to sell her some medicine, which, according to the salesman, is good for health and helpful for one to lose weight. She bought a case and took a bag of that medicine. After she took the second bag, she had diarrhea and vomiting. She became very weak and could not go to work for more than ten days. Then she realized that, as a cultivator, she should not take those medicines.

A female practitioner said that since it had been raining hard recently, she did the exercises at home, and didn’t do very well. She had bad interference when studying the Fa, and she could not calm down to read. Later, she sent forth righteous thoughts to eliminate the interference, and then the words in the book jumped into her brain one by one and made a deep impression.

At the end of the sharing, practitioners encouraged each other to improve by Master’s teaching in Teaching the Fa in Canada, 2006

"They are also a setting I have given you, the only setting in which Dafa disciples can gather and learn from each other via discussion on a large scale. So you must see to it that the goal is truly met, and make them truly conducive to your improvement in cultivation. Only then is a conference meaningful."