It had been raining hard in Taipei, but it became sunny on the afternoon of June 10, 2006. In order to help more people know about the beauty of Falun Dafa, Falun Gong practitioners from ten districts in Taipei assembled at the famous tourist spot in Taipei--Chiang Kai-shek Memorial Hall, to do the monthly group exercise and spread the Fa. 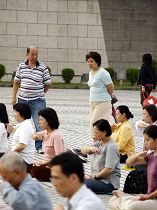 People are attracted to the group exercise

Since the weather was very good, there were a lot of tourists visiting Chiang Kai-shek Memorial Hall. When people passed by the gate, they were attracted to two eye-catching banners--"Falun Dafa is Good" and "Falun Dafa; Truthfulness-Compassion-Forbearance." A big group of Falun Gong practitioners, old and young, were doing the gentle exercises with the peaceful music. Many tourists took pictures of this scene.

Some of the tourists had never seen Falun Gong before. So when they saw the gentle and beautiful movements, they asked the practitioners how to learn it. Somebody imitated the practitioners spontaneously. A British gentleman asked practitioners to teach him how to pronounce the Chinese words for "Falun Dafa is Good" on the banner. The practitioners taught him, and he was very happy and took notes in his notebook. 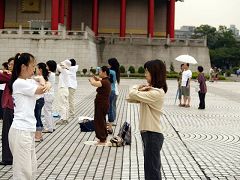 There were several other rallies nearby at Chiang Kai-shek Memorial Hall. Some reporters, who were covering those rallies, were also attracted to the practitioners' activity. They took pictures of the group exercise. A Canadian reporter said that he had seen Falun Gong practitioners in Canada, and he thought that what they were doing is great. A photo reporter from a popular magazine also came by to take photos.

A couple from Hong Kong videotaped the group exercise. They said that they knew about Falun Gong, but they had never seen so many people doing the exercises together. Several young people passed by and were amazed by the exercises, so they took pictures with their cell phones. Several young girls were particularly interested in the "Falun Dafa is Good" banner, and they took pictures of each other with the banner. 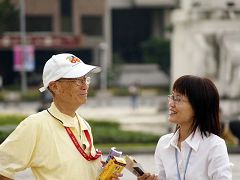 An elderly gentleman took a copy of the Nine Commentaries on the Communist Party. He said that he would read it carefully and tell his relatives in Mainland China about it.

Many tourists enjoyed the peaceful exercise demonstration. They also learned about the truth of the Chinese Communist Party's (CCP) harvesting organs from living Falun Gong practitioners. They were all shocked and didn't understand why the CCP persecutes such a peaceful cultivation group. A British woman, who came to Taipei to visit a relative, said that she doesn't like the CCP and she would take a copy of the Nine Commentaries on the Communist Party to a Chinese student who lives in her house, and let him know the true nature of the CCP. An older gentleman, whose relatives live in Mainland China, learned that eleven million people have quit the party after reading the Nine Commentaries. He asked practitioners to give him a copy. He said that he would read it carefully and tell his relatives in Mainland China about it.

Although it was just a simple group exercise and activity to spread the Fa, we believe that more people will feel the beauty of Falun Dafa through the message of "Truthfulness-Compassion-Forbearance" that the practitioners shared. We also believe that more people will stand up to stop the persecution, and condemn and disintegrate the CCP, so that people all over the world can enjoy the beauty of Falun Dafa.