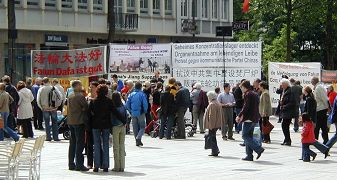 "God, what happened? What are they doing?" "How could these things happen?" German citizens were shocked by the display which demonstrated the CCP's harvesting organs from live Falun Gong practitioners.

On May, 27, 2006, Falun Gong practitioners held an activity in downtown Ulm, in southern Germany, to expose the CCP's harvesting organs from live Falun Gong practitioners. It was a weekend, so a lot of citizens and tourists passed by. Practitioners displayed banners and photos, which clarified the truth of the CCP's persecution. The display, including an iron cage and various instruments of torture, shocked those who saw it. They listened to practitioners and learned the truth about the persecution. Many people could not believe what they heard. They could not believe that, in modern society, there is still such a government, which brutally persecutes a group of people who obey the principle of "Truthfulness-Compassion-Forbearance". Many people signed their names to condemn the CCP's brutality and many of them asked how they can help Falun Gong practitioners in China.

A waiter in a nearby restaurant told practitioners that he had to work, so he could not go to the activity, but he asked practitioners to bring the forms for him to sign, since he did not want to miss the opportunity. Later, practitioners brought the forms to the restaurant, many waiters signed their names, and their supervisor also signed his name.