(Clearwisdom.net) On the afternoon of May 26, 2006, practitioners of Shizuoka County, Japan hosted a press conference at Press Club in the County Government Building, calling for attention and help to stop the on-going crimes of organ harvesting from live practitioners, and to stop the Human Body Show scheduled to be held around Japan. On the same day, reporters from NHK, Shizuoka Broadcasting, The Daily Yomiuri, The MAINICHI Newspapers, Kyodo News and others newspapers and TV networks attended the conference. 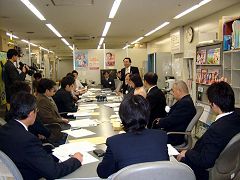 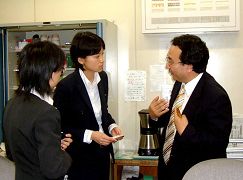 Mr. Sato, editor-in-chief of Epoch Times Japanese edition first introduced the disclosure of the Sujiatun incident, and played part of the interview record of the witness Mr. Peter, and phone call record of some volunteers calling a few major hospitals on inquiry of kidney and liver transplant .

All these verified that the major hospitals in China are using organs from live practitioners for transplantation . According to the record, Peter said that he eye-witnessed the live organ excision in the hospital at Sujiatun in 2003. He also pointed out the security was strict at that time.

Practitioner Ms. Liu of Shizuoka County told that, when she went to talk to Marrow Bank and Kidney Transplant Friendship Association of the county, their responses are astonishing. They said that they knew about the backward organ transplant techniques in China, follow-up service issues, organ trade in the black market, and the Chinese authorities using the death-row prisoners' organs for transplantation. They even pointed out that at least 7 Japanese died from organ transplants in China.

Doctor Ms. Lei Shuhong explained that organ transplant operations have been increasing quickly in the recent years in China, and many hospitals do the operations without permits. This explained the ease of getting organ donors in each hospital. Comparing organ transplant data from China and other countries over recent years, and the direct promotion on the internet about quickly being able to find organ donors, suggests that a large number of Falun Gong practitioners are ready to be killed at any time when hospitals need an organ donor source for a profitable operation.

Ms. Lei Shuhong questioned the sources of the donors for the 4000 of liver transplants and ten thousand kidney transplants in the last year in China. Government officials announced only 1770 executions that year. Even if they were all used in organ transplantation, the gap is still huge.

Ms. Lei also pointed out that most of the liver transplant centers in China were established by the end of 2000 or early 2001. It best explained the organ harvest of live practitioners starting from 2001. It is consistent with what the second witness mentioned that the organ excision from live practitioners from 2001. In 2001, there was a report that there were 14 cases of kidney transplant on one day of April 20 in Taiping Hospital of Humen Town, Dongguan County. And according to the news from the website of Guangzhou Daily, The First Hospital affiliated to the Zhongshan Medical University had even more than ten cases of kidney transplant each day (the highest is 19 cases), while the liver transplant record was 6 cases a day and a multi-organs transplant. It indicated that the killing is going on since 2001. This corroborates what the third witness of the Sujiatun incident said that, the biggest secret concentration camp for Falun Gong practitioners in China is in Jilin Province, one of the three provinces in the northeast China.

Local practitioner Fu Lin narrated that his entire family of six practiced Falun Gong, and that five of them were persecuted in China. His fourth brother Xie Yunhuan, 31, studied in Japan and was unlawfully imprisoned after going back to China to appeal. He was sentenced to ten years in prison for "making 90 fliers and printing 1400 pamphlets". He said that his brother is still in prison, and the authorities don't permit family visits. So it's been a while for not having any contact with that brother.

In the end, the representative of Japanese NPO, Falun Dafa Association, Mr. Tsuruzono Masaaki called media for help to end the killing as early as possible; and to stop the possible human body show in Shizuoka. He said: "Most of the Japanese might think that the organ transplant doesn't do much to Japan. Actually, many Japanese spent a lot of money for kidney transplants in China. They in fact are helping the Chinese Communist regime to kill people."

Reporters asked many questions to each speaker after the conference.