Ye Xiaowen, Director of the National Religion Bureau of the Chinese Communist Party (CCP), is leading a delegation to visit the US. On the afternoon of May 21, 2006, Ye Xiaowen and his delegation held a private meeting with local Chinese churches in Houston. Local Falun Gong practitioners held a peaceful protest outside the church where the meeting was held.

The World Organization to Investigate the Persecution of Falun Gong (WOIPFG) believes that Ye Xiaowen assists the CCP to persecute Falun Gong and issued an announcement that he is being investigated. 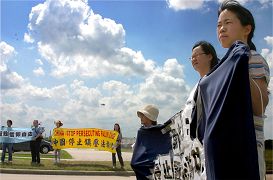 An unnamed person who attended the meeting said that Ye's topic was "Is there really religious freedom in China?" Ye talked about how religions developed rapidly under the control of CCP and defended the CCP's persecution of Falun Gong with lies such as "self-immolation" and "murder". He even claimed that "There is no persecution of Falun Gong in China and over 99% of practitioners are transformed."

Practitioner Ms. Tang, who attended the protest said, "The CCP's so-called 'transformation' means persecution. If there is true religious freedom, why 'transform' the practitioners? Is this to determine punishment based on one's mind? Many Falun Gong practitioners were tortured brutally in brainwashing centers, labor camps and prisons for refusing to be 'transformed'. Many of them were tortured to death. Many more are forced to leave home and have their families broken."

Ms. Tang further said, "The CCP's fabricated lies of self-immolation and murdering have been exposed in the international community. The film entitled "False Fire," which exposes the fabrications behind the staged self-immolation, won an award at an international movie festival.

Security at the meeting was extremely tight. Besides two policemen outside the meeting place, there were at least 7 security guards. Attendees were checked one by one.

Practitioner Mr. Xia at the protest said, "Ye Xiaowen's words are self-contradictory. On the same day, practitioners stood outside the meeting place peacefully with banners in their hands and wished to talk to him in person, but were denied entry."

Mr. Xia said, "Since there was one entrance and exit for the meeting room, Ye Xiaowen, his delegate and other attendees saw the practitioners' banners. After the meeting, when Ye was to leave, one lady shouted at him on roadside, 'Ye Xiaowen, stop persecuting Falun Gong!' If he truly intended to talk with Falun Gong practitioner, why did he thank security personnel for blocking the entry of practitioners and did not dare stop when his motorcade passed by? "

WOIPFG issued an investigation announcement on Ye Xiaowen on May 22, 2006. The announcement stated, "Ye Xiaowen was born in 1950 in Chongqing. He is from Guiyang, Guizhou Province. He is Director of the National Religion Bureau. Since July 20, 1999, Ye has followed Jiang Zemin's hoodlum group to persecute Falun Gong. He has issued slanderous and demonizing words attacking Falun Gong and its founder, including many press conferences on persecution of Falun Gong, media interviews and writings condemning Falun Gong, which were used as study materials against Falun Gong for CCP officials and government employees. These fabricated lies, and hatred inciting words were reported and reprinted by CCP's media such as Xinhua, People's Daily, and Central TV Station. His words misled media, and played roles in the brutal persecution leading to at least 2891 deaths of Falun Gong practitioners."

WOIPFG further stated, "From this day on, WOIPFG sets up an investigation case against Ye Xiaowen and will submit facts and evidence to the International Court, human rights organizations, each government and the Sydney Branch of Special International Court on Criminal Law for Trial of the CCP's Crimes against Humanity at the appropriate time. WOIPFG will sue and expose his crimes in the persecution of Falun Gong. Based on regulations regarding 'foreign officials involved in persecution of freedom of belief, their spouse and children are not allowed to enter democratic countries', WOIPFG will submit his criminal record to each customs and immigration department."

“Turn the Tables on the Evildoers with Righteous Thoughts”