(Clearwisdom.net) Falun Gong practitioners gathered at the Dam Square in Amsterdam. Along with the Service Center for Quitting the Chinese Communist Party (CCP) in the Netherlands and the volunteers of the Epoch Time, they expressed support for the 10 million brave people who withdrew from the CCP, and exposed to tourists from all parts of the world and local people the CCP's crime of removing Falun Gong practitioners' organs at labor camps. 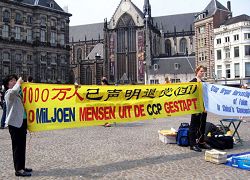 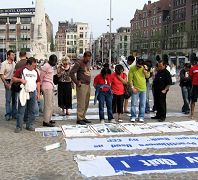 A Canadian tourist said he experienced the Tiananmen Square demonstrations in Beijing in person and still remembered the photo of a young man blocking the tank deeply. He said he understood clearly about the evil nature of the CCP. However he was still shocked by the CCP's crime of removing organs from living people. He hoped more people would pay close attention to this issue.

A middle-aged woman in the Netherlands visited the "Truthfulness, Compassion and Forbearance" Art Exhibition at Amsterdam City Hall last year. At that time she already had the view that the CCP's cruel persecution of Falun Gong practitioners was beyond anyone's imagination. After understanding the large-scale crime of taking organs from live Falun Gong practitioners at labor camps, she covered her chest with her hands and said, "My heart is all broken. This kind of savage act must be stopped at once."

A volunteer at the Service Center for Quitting CCP explained, "In western countries, if one wants to have an organ transplant, one must wait for a compatible organ, which usually takes two years. However, in China, it only takes one week. This proves that there are a large number of living people available as a source of organs. Is this normal? In China at present, many hospitals are working overtime to carry out organ transplant operations. That is to say, a lot of people are being murdered. These people are mostly Falun Gong practitioners." A young girl listened to this in tears. She said she must go to the website to sign her name and express support and help stop this persecution.

By seven o'clock in the evening, the activity came to a successful end.