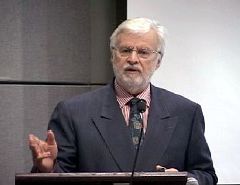 
Mr. Ansley is a well-known specialist on China and has studied relationships between Canada and China for more than 40 years. He worked and taught in China for 14 years as a Canadian law specialist. In 1985, he opened the first foreign law office in China. Besides working as a law consultant for foreign business in China, he handled more than 300 lawsuits and taught International Economic Law at Shanghai Fudan University and Tongji University.

Mr. Ansley stated in his report titled "A Chinese court is not a court" that the CCP controls all courts in China, and that no court dared not to carry out CCP orders. It is very common that, "Those who hear the case do not make the judgment and those who make the judgment have not heard the case".

Mr. Ansley said in an interview in 2004 that Amnesty International did an investigation and discovered that in China, the years with high numbers of executions correlated with years with high demand for livers, kidneys and other organs. We now know that hospitals and courts in China form a system or committee. When a death-row inmate is to be executed, hospitals get a notice. Sometimes the execution is conducted in hospital morgues.

Mr. Ansley spoke about a junior lawyer who sought a job in his law office. She told him that she had handled 20 death sentences. She was a staff member in a local court. She said that police went to the court to discuss with judge whether he would agree to sentence an inmate to death. If the judge agreed, they would call in the woman who applied to work with Mr. Ansley, and ask her to check which criminal law could be used to sentence the inmate to death. She narrated how they took the inmate from prison and escorted him or her to the execution venue. She said that there was an ambulance waiting with the engine running to rush off the freshly harvesting body organs. The Chinese regime has participated in international organ trade in a large scale. These facts are not widely known.

Mr. Ansley was pleased that Mr. David Kilgour and Mr. David Matas would conduct an independent investigation, confirming the supportive attitude of the Canadian government. He said he would like to join CIPFG since his knowledge of the CCP's system could help the investigation bring a swift end to the atrocities.

“Some Details Surrounding the Death of Yang Xiaojie, Who Died from the Torture Suffered in Hebei Province Fourth Prison”