Austria: Practitioners Explain the Facts of the Persecution during an Informal Meeting of E.U. Health Ministers (Photos)

(Clearwisdom.net) On April 26, 2006, an informal meeting of E.U. Health Ministers was held in Vienna, and the Chinese Health Minister and some other officials were invited to attend. 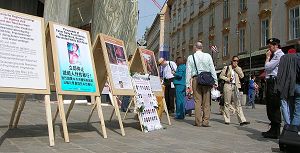 Practitioners call for an end to the atrocities of harvesting living Falun Gong practitioners' organs in China's forced labor camps.

The protest attracts the attention of tourists from various countries around the world, journalists and local residents.

After viewing the display boards, a French lady could hardly believe what she had seen, and asked "How can people do things like that to human beings?"

A professor from Switzerland asked for some more Chinese-version flyers, saying that he wanted to give them to his Chinese students and friends.

A local resident told a practitioner that as the Chinese Communist regime has brainwashed its people. Even if they have their own thoughts, they would not have the guts to speak up.

After viewing the display boards, many journalists attending the meeting took the initiative to ask about the situation in China's concentration camps.

A mid-aged local resident approached the practitioners in front of the display boards and said; "You should expose the atrocities to the prime minister sitting in a café around the corner." When the practitioner arrived at the café, the prime minister was still there along with the foreign minister. The practitioners thus handed to them the flyers exposing the Chinese Communist regime's atrocities and those introducing the facts about Falun Gong. The Austrian National TV Station also came to cover the activities.