(Clearwisdom.net) May 13, 2006 is the 14th anniversary of Master starting to spread Dafa. Practitioners from New Zealand held a celebration on the square across from the Auckland Train Station, despite the rain. 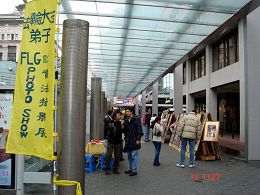 The young men in the picture above are from Germany. They were shocked when they learned that the CCP harvests organs from live Falun Gong practitioners and the major media all over the world have not fully reported these incidents for their interest. They said that during World War II, Hitler persecuted Jewish people, and many media in the world closed their eyes and covered their ears, not reporting it, which made the persecution worse and worse. Nowadays, it is the historic tragedy repeating itself that the media don't want to report the CCP's persecution of Falun Gong, due to their benefit. It is a sin and dangerous. They said that they will do their best to spread the news of the CCP's harvesting organs from live Falun Gong practitioners, asking all the kind people in the world to stand together to stop this brutal persecution.

The young couple in the picture above is Spanish. Practitioners told them about the organ harvesting. They said that they had never heard about such a brutal thing. They said that in Spain, people in their social circle thought that China is very developed and people are happy. Many people went to China to adopt babies. But they didn't know that the CCP is so brutally persecuting Falun Gong practitioners who believe in "Truthfulness, Compassion, Forbearance". They thanked practitioners for telling them the facts, and said that they will tell everybody they know, and let them know the true nature of the CCP, and stand together to stop the brutal persecution.

A middle-aged gentleman passed by the photo exhibition on the way to work. After learning the truth, he said: "Your way of clarifying the truth is the best to expose the brutality of the CCP." He signed his name to support Falun Gong.