(Clearwisdom.net) On May 13, 2006, to celebrate the 14th anniversary of the public introduction of Falun Dafa, practitioners from Kinmen went to the Juguang Tower Square (Brightness of Ju Tower) to do the exercises, take photos and celebrate.

Since May 13, 1992, the benevolent and great Master has spread Falun Dafa to the public. Sentient beings found a way to return to true home. People, who happily obtained the Fa, spread it to others. In last fourteen years, Falun Dafa has spread to almost 80 countries and more than 100 million people benefit from it. 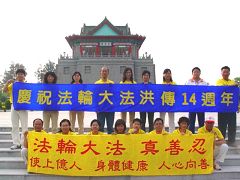 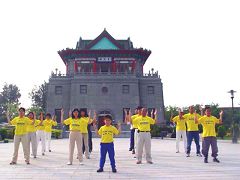 However, on July 20, 1999, the Chinese Communist Party (CCP) launched the persecution of Falun Gong. CCP spread lies all over the country and deceived people. Residents in Kinmen, which is very close to Mainland China and separated only by a narrow ocean channel, were also influenced. But the truth will be revealed eventually. Falun Gong practitioners kept clarifying the truth, and people learned more and more about the CCP's evil nature, and the grace of "Truthfulness, Compassion, Forbearance". In last few years, the number of Falun Gong practitioners in Kinmen has kept increasing.