Florida: Spreading the Grace of Dafa at Celebration of World of Nations (Photos) 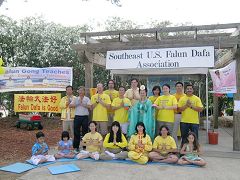 In the month of every May, the Celebration of the World of Nations is held in Jacksonville, the largest city in north Florida. It has become a popular activity and thousands of visitors attend. The fourteenth Celebration of the World of Nations was held this year from May 5 to 7, 2006. Falun Gong practitioners were invited to participate in the celebration.

The month of May this year is the fourteenth anniversary of Falun Dafa's introduction to the world. In May 14 years ago, Master Li started spreading Falun Dafa to the public. One hundred million people in over 70 countries have joined the practice. Falun Gong practitioners attending the celebration included those from China, Taiwan, Vietnam, Europe, Mexico, Ecuador, representing the wide spread of Falun Dafa across the world. 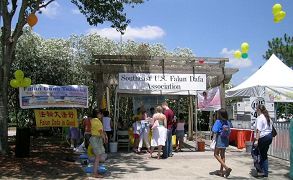 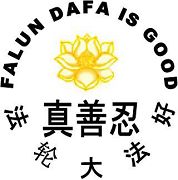 One of the most important activities of the celebration was that visitors received "passports" and got "visas" from the stalls of different countries - a stamp or a sticker. In this way, the visitors would visit all stalls. Practitioners prepared a stamp engraved "Falun Dafa is good, Truth, Compassion, Tolerance." Several thousand visited the practitioners' stall and got the stamp in their "passports". The practitioners explained to them the meaning of the stamp. 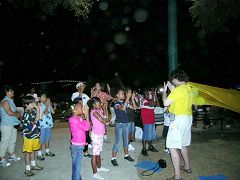 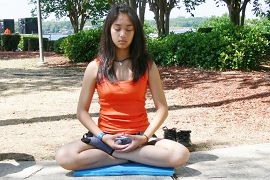 Learning and teaching the exercises

A group of high-school students learned the meditation exercise. They all said they felt relaxed and peaceful. One 10-year-old boy brought his friend after learning the paper lotus flower folding and exercises.

After hearing that many children in China become orphan because their parents are persecuted by Chinese Communist Party (CCP), a lady said that she would print more postcards calling for President Bush to help rescue the orphan. She has a printing business. She will call for more people to help those orphans being persecuted in China.

Many visitors said that they watched the news about Dr. Wenyi Wang shouting at the White House and supported her action. Many people expressed great concern about the live organ removal and asked how to help to stop the atrocities.

A lady from Dalian, Liaoning Province, China was surprised to see Falun Gong practitioners. Though she paid attention to news in the Epoch Times, this was her first time to talk directly with practitioners in the US. She said that two of her neighbors in China suffered a lot in last six years from CCP persecution because of practicing Falun Gong. They did not waver in their determination to practice. She said she felt the power of belief. 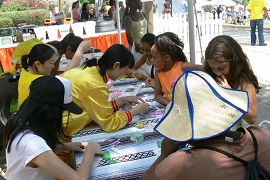 During the three days, the paper lotus folding attracted many people. They were touched by the stories behind.

A practitioner studying in University of Florida said, "What I was moved most was that all practitioners cooperated like one body. There were practitioners of Chinese, American, Vietnam, and Spanish-speaking heritages. They explained the facts in their own languages. Many children came to learn how to fold paper lotus flowers. In the process, they got to know the persecution and that children of their age in China are being persecuted, just because that their parents do not give up their belief."

A practitioner who just came to US from China was also touched. This was her first time to tell people freely the grace of Dafa and CCP's brutal persecution in the event together with so many fellow practitioners after the persecution.

“Recalling the Miracles When Master Held Classes in Wuhan City”