On Friday, May 5, 2006, Falun Gong practitioners in France went to the Convention Subway Station in Paris to expose the evil deeds of the Chinese Communist Party (CCP). They played recordings, displayed poster boards, collected signatures, and distributed truth-clarification leaflets. People condemned the CCP's crimes and appealed to the world's people to stop the CCP's cruel killing. Many citizens signed the petition to the French President. They urged the French government to make efforts to rescue Falun Gong practitioners who are being persecuted in CCP' labor camps, prisons, and concentration camps. 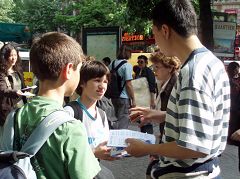 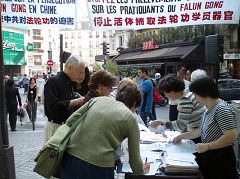 One French lady who has been to China said she already knew that the CCP persecutes Falun Gong practitioners. She told us her experience of applying for a visa at the Chinese Embassy and her journey in China. She said: "I know this issue because when I went to apply for a tour visa to China, I happened to see some activities similar to this in front of the embassy. I took some handouts. When I entered the embassy, the door guard asked me to throw away the handouts and newspapers about Falun Gong. I refused and said to them: 'I haven't seen them yet; you can't force me to do things! This is not China!' They then became very angry. After 15 days, I picked up my visa and went to China, and stayed there for about 10 days. However, my luggage was slashed and broken. I don't know whether it was because I read some Falun Gong newspaper and attracted their attention, though it could be a coincidence. When I was in China, I indeed couldn't appreciate some Chinese peoples' behavior. There were many soldiers spying on the tourists all the time. I know that one lady and her entire tour group were taken to the police station and kept there for a whole night. All of their film was taken out of their cameras. The police inspected all of their photos without giving any reasons. I guessed that they thought that there might be some photos regarding Falun Gong practitioners. From then on, I started to realise what had happened. But I never knew about the organ harvesting. It is so horrible! In a time like now, they (CCP) still torture these people! It is too cruel! I think you people are very courageous. What you have done is very good. We must let people know all about this."

Another lady said: "I don't know the entire situation of organ harvesting. I have seen the letter to the President. I hope more people can come to sign it. I hope we can stop what is happening. We must expose it to the whole world. All of these things just cannot be accepted. We must take some action, spread this information to more people, to let people know what still exists in this world. Apart from our actions, the French government can make some effort as well. I hope we can make something happen to stop these atrocities."

A young lady said: "I think this is too cruel, we need to take action now. The media need to report more news, and let more people stand up against this crime. I think the French people can put some effort into this."

One student said: "I think this is unacceptable, such a thing should not happen in this century. We haven't seen this since the 'Nazi years during World War II. Organ harvesting is totally intolerable to me, which is why I signed the petition. For me as a young person, I think I should put some effort for the future."

Mr Joelle, a Cuban who has obtained political asylum in France, said: "I used to be a reporter in Cuba. Under the communist rule, if a reporter wants to tell the truth, he faces the danger of being persecuted to death. We do not have freedom of speech, everything is under the government's close control."

Ms. Alice said: "It is unbelievable! How can such a thing happen! This is shocking. It's horrifying! The French government must do something. I would feel ashamed if my country doesn't take any action." 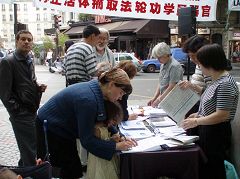 Ms. Alice signs the petition together with her child.

Mr Saloum said angrily: "This is a disaster. Communism is always like this. The high-ranking people in the government get all the benefits while the people are dying. I hope the situation will change one day."

“Recalling the Miracles When Master Held Classes in Wuhan City”