Recently, practitioners in southwest suburban Sydney have exposed the Chinese Communist Party's (CCP's) atrocities of organ removal from living Falun Gong practitioners, to the local people, the government and the media. On April 29, 2006, practitioners collected signatures and distributed flyers to people in the biggest shopping center in Liverpool. 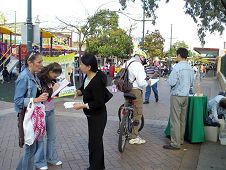 Many people came over to read the posters and accept flyers. Many of them listened to the practitioners' explanation of how the CCP persecutes kind, peaceful and sincere practitioners. Some wept upon hearing of the atrocities. Some felt that it was inconceivable for such a persecution to take place. Some asked, "How can we help?"

More than 2,000 copies of handouts were distributed within a few hours. Several hundred people signed the petition to stop the persecution. After listening to the practitioner's explanation, a young man with tears in his eyes found his eight acquaintances nearby and told them about the persecution in China. Later, each of them signed their names and addresses on the petition form. 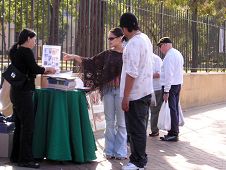 Around 1:00 p.m., two young women, university students, came over. One of them introduced herself and her friend (who is several months pregnant) and then said, "Last week I got a flyer here. I cried after reading it at home. I told my boyfriend and my classmates about it. They were shocked and indignant! They all said, 'How come such brutality occurs in today's world?'" She continued, "Today I specially came here to meet you. My friend came with me too. I went online and checked your website. We think the CCP's persecution of Falun Gong is the biggest terrorist action in today's world." 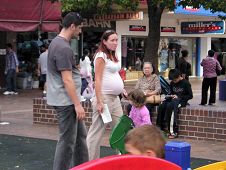 Falun Gong practitioners explained the facts further and introduced the Nine Commentaries on the Communist Party to them. They said they would read it, and left their contact information. One of the students said, "We're thinking about applying for a permit from the local government to come here each weekend and tell all people about the inhuman atrocities occurring in China." She asked for a signature collection form from a practitioner and said, "We will make more copies and ask our classmates, and my boyfriend's friends to sign. My boyfriend has already told his friends about the CCP's atrocities of organ removal from living Falun Gong practitioners and cremating their bodies to destroy the evidence." Then the two of them distributed handouts and collected signatures until the event was ended.