(Clearwisdom.net) The 17th Spring Fiesta opened at Lake Eola Park on April 1 and April 2, 2006 in Orlando, Florida. Lake Eola is located in central Orlando, where lots of shops and restaurants create a big draw for tourists. 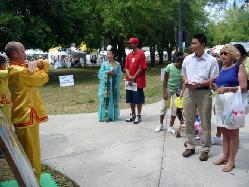 The Spring Fiesta attracted many artists from different fields and industries to demonstrate their arts and crafts, such as jewelry, clothes, ceramics, painting and sculpture. Some are traditional handmade crafts and some are created with modern techniques. As a unique qigong that cultivates both the mind and body, Falun Gong was a refreshing addition to the festival.

Falun Gong practitioners wearing yellow exercise suits demonstrated the five sets of slow and graceful exercises with the Falun Gong music and commentary in the background. Several women practitioners wearing beautiful "celestial maiden" dresses distributed flyers that explained the exercises. Some practitioners volunteered to teach people how to make paper lotus flowers. Together they demonstrated the traditional Chinese cultivation practice and ancient Chinese culture. People were attracted by the peaceful exercises and they listened to the practitioners explain the outstanding health benefits of Falun Gong. The harmonious atmosphere attracted many people, some of whom started learning the exercises. Some locals asked about practice sites, as they wanted to explore this wonderful practice further.

The practitioners also explained to the visitors about the persecution against Falun Gong that is going on right now in China. Recently, a witness revealed that a secret concentration camp located in Sujiatun, Shenyang City has held 6,000 Falun Gong practitioners since 2001. The Provincial Thrombosis Hospital of Integrated Chinese and Western Medicine, where the concentration camp is located, is where Falun Gong practitioners' kidneys, livers, corneas and other body parts are removed for illegal sale before their bodies are tossed in a crematorium. Three-quarters of the 6,000 Falun Gong practitioners have already had their hearts, kidneys, corneas and skin removed and their bodies burned to destroy the evidence. People were shocked and indignant at the revelation. One young woman said that her friend went to China one year ago and witnessed the violence of the Chinese police, when she saw some police officers ruthlessly beat an elderly woman who sold things in Tiananmen Square.

Visitors who came to the exhibit table and who took flyers were from all over the world, including Mainland China. One woman had just recently arrived from China, and she was happy to see so many Chinese people at the table. She mentioned that she had already read the "Nine Commentaries on the Communist Party" in the Epoch Times newspaper.