(Clearwisdom.net) At 8:30 a.m. on April 1, 2006, practitioners of Miaoli County, Taiwan set up a site in front of Farmer's Association of Toufen Town to expose the Chinese Communist Party (CCP)'s atrocities in Sujiatun Concentration Camp. 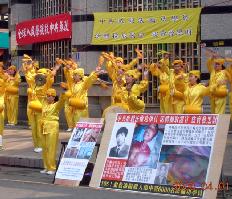 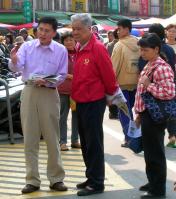 A practitioner explains the contents of the posters.

The Farmer's Association at Toufen Town faces a park and is next to a market. It was a holiday that day. Crowds of people came and went. The waist drum performance caught the attention of many people to stop by and watch. The practitioners were busy in distributing truth-clarification materials. People were shocked by the brutality of the persecution and read the literature in hand attentively.

Some people walked into the site to read the posters. Through practitioners' explanation and after viewing photos and posters exposing the Sujiatun atrocities, people accepted handouts exposing the crimes. One person questioned the authenticity of the posters initially. After a practitioner's explanation, he soon learned the fact and satisfactorily left with a few more copies of handouts for friends. An old gentleman just came back from visiting relatives in mainland, he told a practitioner, "I believe these are all true. No media dare to report them. You (practitioners) are great!"

Some ladies shopping for groceries said, "The atrocities of the Chinese Communist Regime will not be accepted by anyone anywhere! No wonder that not long ago, my relative went to Mainland to get a kidney transplant and passed away within a few months. We suspect the source of the organs, which might be just removed from Falun Gong practitioners. It's so horrible!"

More and more people are awakening and recognizing the evil nature of CCP. The Sujiatun incident is widely awakening people's conscience.