Taipei, Taiwan: Grand Parade Supporting Withdrawals from the CCP Calls for an End to the Persecution of Falun Gong (Photos) 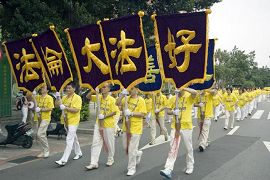 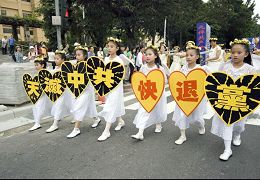 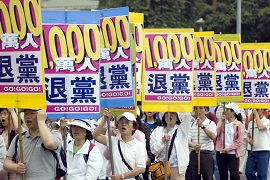 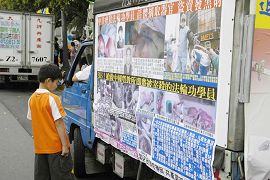 In Tears Many Times, Very Touching

A Taipei citizen heard the news from her classmate and came especially to participate in the parade. She said she had shed tears many times and was moved by Falun Gong practitioners who spontaneously and voluntarily came for this parade. She thought Falun Gong practitioners have the right to step forward to condemn the vile CCP, and they also are very clear on the CCP's true nature, because they have been suffering persecution for seven years.

She said the CCP is most afraid of Falun Gong, because Falun Gong practitioners are fearless and selfless and take their personal interests lightly. They dare to speak out. Without the CCP, the world can exist peacefully. 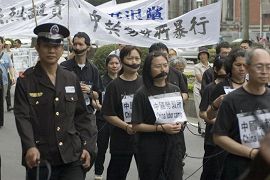 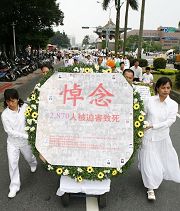 Far Away from the Days of Kidney Dialysis

Practitioners from San Chong, Taipei County put on a show to present the scenes of Falun Gong practitioners who have been detained in forced labor camps and concentration camps in Mainland China, being enslaved and treated inhumanely. They dressed in dark prison clothes with their mouths sealed off with black cloth strips. They wanted to make the persecution vivid to people. One of them was Mr. Liao, who acted as a police officer. He said that he began kidney dialysis in 1998. Not until 2001 was he fortunate enough to read a flyer on a bus, about Falun Gong's free exercise instructions. He then started practicing Falun Gong. His health has now obviously improved and his mother also started to learn Falun Gong. She not only likes reading Zhuan Falun, she is also physically healthy and in high spirits, so her children do not need to worry about her.

Ms. Chen from Xin Village also once received kidney dialysis for eight years. She was often tired and needed bed rest. After practicing Falun Gong, her symptoms and discomfort have greatly improved. She said smilingly, "My presence today in the parade is the best verification." There were also older women in their 70s in this group of practitioners who acted as practitioners suffering persecution in the Mainland. It showed that the CCP's suppression of good people targets all ages.

Mrs. Zhang held a banner reading, "Don't allow the crimes to intensify while people wait passively." She is from Taiping, Taizhong. She started practicing Falun Gong together with her husband before the persecution began on July 20, 1999. Since then, she has never used her Health Insurance Card, and has never seen a doctor, because all her old illnesses disappeared. Their children are not practitioners but they tell everyone they meet that Falun Dafa is great. In addition, she is 58 years old but looks as if she is in her 40s. She has experienced a renewed life from practicing Falun Gong. Therefore, she also went abroad to participate in truth clarification activities. She hopes to awaken more kind people so that more people will pay serious attention to the life-and-death situation of people in the Mainland.

Ms. Huang, who came back to Taiwan from America to participate in the parade, pointed out that the live organ harvesting is not at all a human act. She said that any parade is often geographically restricted, but activities condemning the CCP's atrocities and supporting the withdrawals from the CCP can transverse boundaries and races. When you are abroad and see people of all ethnicities stand together in the supporting procession in the parade, you will be very emotional. The CCP's crimes deserve unanimous condemnation.

Ms. Ni has been practicing Falun Gong for four years. The three members in her family were in the line-up of mourning Falun Gong practitioners who have died from persecution by the CCP. They just came back from Washington DC where they participated in protests against the CCP's persecution of Falun Gong, and they immediately came to join this parade after leaving the plane. She expressed that the biggest change after practicing Falun Gong for her is that she has become even more easy going and considerate of others. The family is in great harmony. Her sixth grade daughter attended Minghui School for three years. She can look within whenever confronted with problems and also can take care of herself.

Exercise Demonstration is in Good Order - Peaceful and Beautiful

A performing troupe composed of 160 practitioners from Taozhumiao brought the beauty of Falun Dafa to people during the parade. Taiwan NEWS English Edition reporter Mr. Yi followed the parade procession for nearly two hours. He took many photos from different angles. Afterwards, he expressed to practitioners that he felt admiration and felt that the persecution was inconceivable. All the way through, he did not hear any music, nor orders, but practitioners were able to do the exercises in such an orderly fashion, peaceful and harmonious. He was indeed moved.

“The CCP Is the Biggest Anti-China Force”

“Germany: Calling for an End to the CCP's Killing of Falun Gong Practitioners (Photos)”