Dr. Li Xianghong was 37 years old when she went missing in 1999. She worked as a doctor in the Testing Section at a county hospital in Shenzhou City, Hengshui Region, Hebei Province. 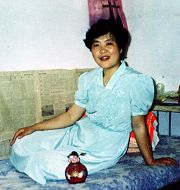 After the Chinese Communist regime began the persecution of Falun Gong on July 20, 1999, Dr. Li Xianghong went to Beijing on July 23 to validate Dafa, but has been missing ever since. We wondered recently if Dr. Li was among those practitioners sent to one of the 36 concentration camps established for the purpose of performing live organ harvesting on Falun Gong practitioners. We hope the international community will pay attention to her disappearance.

Li Xianghong's husband, Liu Tieguang, and her other family members, tried all kinds of ways to look for her. They even put ads on TV and went to try to identify unknown bodies, but no one had any information about her. Her disappearance pains her family greatly.