(Clearwisdom.net) On April 23, 2006, groups and individuals from different fields in Taiwan jointly initiated a parade activity entitled, "Support Human Rights, Support 10 Million People Quitting the CCP." The attendees condemned the CCP's atrocities of harvesting organs from living Falun Gong practitioners, and called upon the international community to look into all forced labor camps, prisons and hospitals in China, and immediately stop the CCP from killing and persecuting Falun Gong practitioners.

The parade procession set off from Kaidagelan Boulevard in Taipei, and then marched along Zhongxiao East Road toward the No. 2 Building of the World Trade Center in the East Area. The parade procession passed through the busiest business district. The route was 6.5 km, attracting 15,000 people to participate. The parade procession spanned four km, and the scene was spectacular. Many media outlets came to conduct interviews and cover the parade. The parade once again brought the Taiwanese people to focus on the Falun Gong's appeal of "Stop the Persecution, Stop the Killing" that has never ceased in the past seven years.

Ten Million Withdrawals from the CCP, the CCP comes close to its end 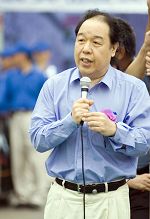 Ming Chu-Cheng, a professor of political science at National Taiwan University expressed that many despotic political powers may look strong prior to their collapse, but the CCP has come close to its end. Soon, it will be eliminated by Heaven, just like former communist Soviet Union and eight countries in Eastern Europe. It indicated that the tyranny's being formidable is not reliable. "Good will be rewarded, and evil will be punished," and tyranny must perish, these are lessons from history. Ten million withdrawals represent people's wholehearted support. As for the collapse of the CCP, people do not need to worry if China will be in chaos, because the CCP is absolutely not equal to China, the CCP's collapse is absolutely not the demise of China. On the contrary, the disintegration of the CCP is the rebirth of China. 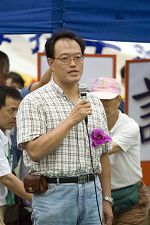 Founder of Human Nature Foundation Shi Ying expressed that the Nazis' holocaust made people concerned about the inhuman collective persecution under despotic systems, however, the withdrawals happening inside China have rekindled people's hope for humanity. People may transform the brutality of the despotic political power because they have learned the truth and their conscience has been awakened, but the premise is that there must be opportunities for people to learn about the true nature of the CCP. 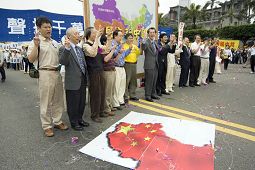 All guests pull together to disintegrate the CCP

Chinese journalist Ms. Wang Wenyi, shouted loudly, "Stop Persecuting Falun Gong" at the US welcoming ceremony for Hu Jintao. Was she against professionalism? Renowned political commentator Lin Baohua expressed that this was an act representing conscience and a sense of justice, and should not be taken as a focal point to comment; conversely, the press, which remains indifferent to the CCP's mass killing of people, and loses its professional spirit when facing the CCP, should be condemned by society. How many people has the CCP killed? Have the media condemned it? Why claim Wang Wenyi is against professionalism only for speaking out several words of conscience!

Lin Baohua said, as a friend of Wang Wenyi, he wanted to salute her. Actually, Wang Wenyi has two professions, one is a doctor, the other is a journalist. Shouting, "Stop Persecuting Falun Gong" on that kind of international occasion, was mainly out of her humanitarian spirit as a doctor.

A taxi driver said that from today's parade, he saw people voluntarily come out to support the withdrawals from the CCP happening in China. Many young couples carried their children, and there were also many elderly people. He hoped more media outlets could pay more attention to and report on the CCP's outrageous atrocities. 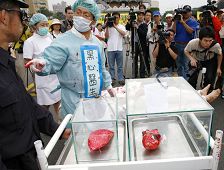 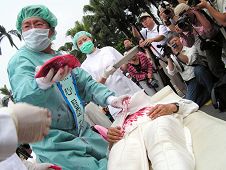 Liu Shao-Tung, associate professor of human anatomy at Kaohsiung University broke down in tears as soon as he started mentioning the CCP's harvesting and selling Falun Gong practitioners' organs for profit. He was indignant at the CCP's barbaric acts.

A middle-aged woman said that after watching the report on TV she watched the news of live organ harvestings from Falun Gong practitioners by the CCP. She had never expected that there are still such cruel things occurring in the world today. She could not help crying after saying this. 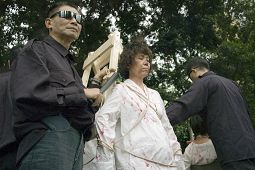 A young woman who got a copy of truth clarification material as soon as she walked out of the subway, said, "Is it true? It's horrible!"

Two students from the fifth grade said, "Is this happening in Mainland China? Has it been done by the police? How can they be so cruel? My father works on the Mainland, I'll tell him about this immediately."

An elderly man in his 80s had his family in the Mainland implicated because he was overseas. The CCP deprived them of the opportunity to work, limited their food supply, and several of his family members were starved to death. He believes that the tyranny must perish, and that he will live long enough to see the disintegration of the CCP.

A mother carrying her child on a bicycle expressed that everyone has freedom of belief. It is very inhumane to force people to give up their belief. The CCP slaughters the people as a butcher does animals. Everyone should stand up to condemn the CCP.

Falun Gong practitioners acted out a play to help people gain deeper understanding of the CCP's atrocities of live organ harvesting. Prior to the play, a practitioner who acted as a police officer said he felt depressed. Usually, as a cultivator, he tried his best to be a good person, but today, he had to act such a role.

After the parade set off, the play was performed on the truck that led the parade.

The parade procession attracted the attention from passersby, who held a heated discussion among themselves. A special edition newspaper of the ten million withdrawals from the CCP distributed on the way was well received by the spectators. Many people could not help reading immediately after getting the newspaper to find out what is happening, and why the CCP, which looks so strong, is ready to collapse.