(Clearwisdom.net) On the afternoon of April 13, 2006, Falun Gong practitioners exposed the atrocities occurring in CCP forced labor camps and concentration camps. They distributed flyers and held up banners and display boards on Low Plaza at Columbia University.

It rained off and on, but passersby stopped to find out about the persecution when they saw the banners. Five hundred flyers were distributed in two hours, so practitioners prepared new flyers and continued to distribute them until evening. 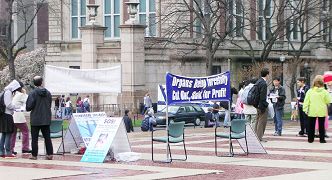 People stopped to find about the persecution.

“Do Not Delay One Minute (Photos)”