The annual "Cherry Blossom Festival" in Chinhae has a history of more than 40 years and it is the largest cherry blossom celebration in Korea. Every year, about 1 million people come out to appreciate the cherry flowers and participate in all kinds of colorful celebration activities. Taking this wonderful opportunity, from April 1 to 9, local Falun Gong practitioners held activities to raise awareness of the CCP's atrocities of harvesting organs from living practitioners for profit and cremating the remains to destroy evidence. Through the activities, they hope that the public can clearly see the evil nature of the CCP and take action to end the atrocities. 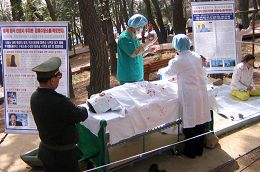 Before the activities, they visited the local police department and city government to clarify the truth about the atrocities in the Sujiatun Concentration Camp. They also delivered a special printing of the Epoch Times detailing the tide of Chinese people withdrawing from the CCP and its affiliated organizations.

The activities were held at Sculpture Park in Chinhae city. Practitioners displayed large banners and photos about Falun Gong and the persecution in China. Most tourists listened to practitioners' explanations about the practice and the persecution, and read the photos attentively. Some also took photos of the site. An older Christian lady asked what she could do to help practitioners persecuted in China.

As the park is at the foot of a mountain, there was quite bit traffic, and all vehicles drove slowly. Practitioners were thus able to distribute materials about the Nine Commentaries on the Communist Party to tourists in the vehicles. Some tourists in buses also took the initiative to ask for the materials.

Every day, practitioners' truth-clarification activities started at 10:30 a.m. and concluded at 5 p.m. One day, a young man passed by and saw the news about how the CCP harvests organs from living practitioners detained in labor camps and concentration camps. He was shocked and said: "How can such atrocities have happened? He said that he would do research on the internet to verify the news and then help to spread it online. People who have learned the truth unanimously condemn the CCP's atrocities and in succession signed the petition. Once, for example, a lady told all her companions to sign the practitioners' petition to resist the persecution.

On April 8, practitioners held two anti-torture exhibits in the morning and afternoon respectively. In addition, they also demonstrated how the CCP's persecution policies have encouraged doctors and nurses to harvest organs from living practitioners. Upon seeing the site, many people stopped to watch and commented: "How can such atrocities have happened?"

During these activities, many people asked what kind of people Falun Gong practitioners are and why local practitioners would hold such activities. Practitioners told them: We are all Korean Falun Gong practitioners and the purpose of these activities is to help end the most brutal persecution in history as soon as possible. In China, the news is controlled by the CCP. People in China rarely know about the atrocities happening next to them. Therefore, it is very important to spread the news about the atrocities and our efforts will soon let the news spread to China as well. Only if the truth is exposed to the whole world can such atrocities be stopped and prevented from happening again.

During the 9-day activities, a large number of people learned the truth about the persecution happening in China and said that such atrocities should not be allowed to happen again.

“The CCP Does Not Fear Ridicule, but it Fears Exposure of its Crimes: The Significance of the "Coalition to Investigate the Persecution" and its Effort to Conduct an Investigation in China”