Over two thousand Falun Gong practitioners, volunteer workers from the "Quit the CCP" (Chinese Communist Party) Service Center, and China Human Rights activists from all over the world, joined together for a grand parade in Los Angeles Chinatown. They protested the persecution of Chinese people and supported the over eight million Chinese who have quit the CCP. The parade was held on the morning of February 26, 2006. Around 2 p.m., Falun Gong practitioners moved to another Chinese community--Valley Boulevard, where they displayed banners and posters and practiced the exercises, forming a "Great Wall of Truth (about Falun Gong)". 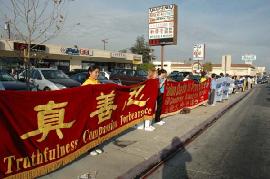 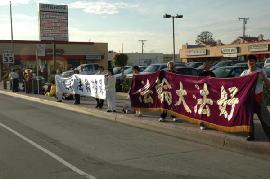 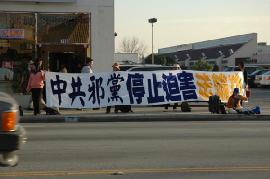 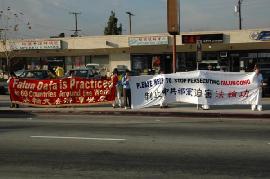 Under beautiful sunshine, practitioners' colorful banners and posters attracted a lot of attention. Many people slowed down their cars and lowered their windows to look at the banners and posters. Some honked to show their support, while many others simply gave a thumbs up and said: "That's good!"

A practitioner from Taiwan was doing the exercises while her coworker from Taiwan and the coworker's brother passed by. The coworker was surprised to see her doing Falun Gong in Los Angeles! They parked their car far away and came over to talk to her. In the end, they got a lot of materials explaining the facts of Falun Gong and the persecution.

At a bus stop, a gentleman and a lady sat on each end of a bench. Hoping to help them learn about the evil nature of the Chinese Communist regime, a practitioner approached and sat in between them. She then started to tell them how the CCP had been persecuting innocent Chinese and had persecuted nearly three thousands practitioners to death. At first the lady was pretty defensive. She said she's a CCP member and didn't think CCP was too bad. Nevertheless, she listened to the practitioner's explanation. Gradually, she calmed down and listened more carefully. The gentleman listened to the practitioner talk and was wondering why the bus was late. By the time she was about to finish her talk and the two already learned the truth, two buses arrived.

A practitioner started to practice Falun Gong in Mainland China and quit after the CCP started to persecute the practice. After he came abroad, he had been looking for Falun Gong, but had not found it until today. He was delighted to see so many practitioners in the "New LA Chinatown." He happily joined others to practice the second exercise.

Many people learned what Falun Gong is, and found out about the CCP's brutal persecution through the "Great Wall of Truth." Almost all passersby received truth-clarification materials from practitioners. A Taiwan immigrant said that she had a satellite receiver and could watch New Tang Dynasty TV at home. However, she still didn't quite understand what Falun Gong was. After listening to practitioners' explanations, she said that she finally got it.

The grand "Wall of Truth" project concluded at 5 p.m.

“Honest, Kind and Willing to Help Others”