(Clearwisdom.net) On the evening of March 28, 2006, California's Union City Council passed a resolution, which decided to report to President Bush about the Chinese Communist regime's (CCP) atrocities of harvesting live Falun Gong practitioners' organs in the Sujiatun Concentration Camp, and urge him to take action. 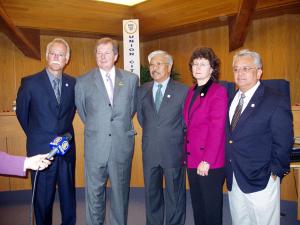 All members of Union City Council in California unanimously passes a resolution, deciding to report to President Bush about the Sujiatun Incident

Bay Area computer engineer Shang Changhe began, "The media recently disclosed that the Sujiatun Concentration Camp has held more than 6,000 Falun Gong practitioners, their organs are removed when they are still alive, and their bodies are cremated to destroy the evidence. It is reported that only 2,000 practitioners are still alive there, no one is able to come out of the camp alive." Shang Changhe called upon the city council to write to President Bush and California State Council members to request the United States and the international community to investigate the atrocities committed at Sujiatun.

Ms. Cheng, who was arrested and detained in China for practicing Falun Gong, recently arrived in the USA. She recounted the persecution she suffered for appealing on behalf of Falun Gong in China. She said that she had been detained three times by Chinese police. During the detention, she had been subjected to tortures such as being forced to stand for a long period of time, being forced to kneel down, sleeping on cement floor and having her head bumped against the wall and other tortures. The guards once threw her heavily on the ground, as a result, she sustained an injured back and could not take care of herself. Upon hearing of atrocities committed at Sujiatun, she said, "I hope the American government will show concern about the incident, and will conduct an investigation and rescue the Falun Gong practitioners who are still alive."

Falun Gong practitioner Shen Shumin explained that both she and her husband had suffered persecution in China for practicing Falun Gong. She said, "Since the CCP started the persecution in 1999, our telephone had been tapped, and the police officers often came to our home to harass us. On a cold winter day, the police came and smashed our windows, and besieged us for seven days. Our personal freedom was severely curtailed."

Shen Shumin continued, "We went to Thailand afterwards, but they still would not leave us alone. We were often followed and had our photos taken by somebody secretly. Even worse, they came to our residence to threaten and harass us. Our personal safety was endangered." Shen Shumin is worried about the safety of detained Falun Gong practitioners in the Sujiatun Concentration Camp. She hoped the American government would conduct an investigation as soon as possible and rescue the practitioners detained there.

During the break of the city council meeting, the attendees asked for information and materials about Sujiatun Concentration Camp from Falun Gong practitioners around them. Deputy Mayor Richard asked Ms. Cheng more about the persecution of Falun Gong.

The city council resumed their meeting. Deputy Mayor Richard proposed a resolution, motioning the city council to write to President Bush to report to him about the recent atrocities of harvesting live Falun Gong practitioners' organs at Sujiatun, and urge him to take action. All members voted unanimously to adopt the resolution.