Recently the international community was shocked by the news exposed by the Minghui/Clearwisdom website that the Liaoning Provincial Thrombus Hospital of Integrated Chinese and Western Medicine in Sujiatun, Shenyang City established a secret concentration camp to harvest living Falun Gong practitioners' organs for sale to gain exorbitant profits, and then cremate their bodies to eliminate evidence. In order to let more people, in particular overseas Chinese, know and pay attention to this atrocity, some U.K. Falun Gong practitioners along with the Epoch Times' volunteer workers went to Chinatown on March 25, 2006, regardless of the rain, to explain the on-going atrocity in China's Sujiatun to passersby and the Chinese there. In the meantime, they gave away special handouts on the Sujiatun Concentration Camp there. 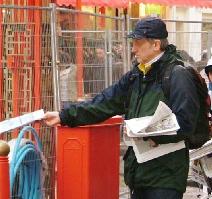 A practitioner gives away special handouts on the Sujiatun Concentration Camp to passersby.

“My Dear Friend, When Will We Meet Again?”