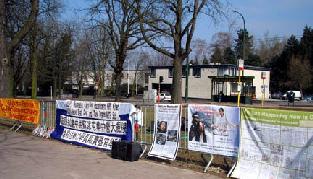 At least 6,000 Falun Gong practitioners have been imprisoned in Sujiatun Concentration Camp. The CCP has killed many of them through harvesting their organs and then cremating their remains to destroy evidence. This extreme evil deed against practitioners is an outrage to heaven and earth. Such a brutal tragedy occurring in today's society demonstrates the CCP's evil nature and can only hasten its demise.

The practitioners broadcasted news reports exposing the CCP's atrocities and interviews with two practitioners familiar with the situation. They also relayed calls from more than 1,000 family members of practitioners who wish to ask the world to help rescue their relatives.