The Facts of the Persecution of Practitioner Mr. Hao Jun in Jinchang City, Gansu Province (Photo)

(Clearwisdom.net) In 2003, the Jinchuan District Court illegally sentenced practitioner Mr. Hao Jun, from Gulang County, Gansu Province, to four and a half years of imprisonment simply because he practiced Falun Gong and upheld his belief in Truthfulness-Compassion-Forbearance. The authorities have been persecuting him at Lanzhou Prison. 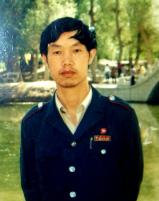 With a college degree, Mr. Hao Jun, 48, once worked for the Bureau of Real Estate Taxation in Jinchang City as an Associate Director of a bureau branch. He started to practice Falun Gong back in 1998. After he started to practice, illnesses that had troubled him for many years disappeared and he became a healthy person again.

On August 24, 2000, Mr. Hao was clarifying the truth when the police arrested him. On November 23, the authorities in Jinchang City sentenced him to two years of forced labor. When he was taken to Pingantai Forced Labor Camp of Lanzhou City on December 11, he was diagnosed with pleurisy. Due to his poor health, the labor camp authorities at first refused to accept him. Although he was released for medical treatment, the authorities picked him up again on January 2, 2001, and put him in the detention center. They later got him admitted to the Pingantai Forced Labor Camp.

On May 30, 2003, Jinchuan Branch Police Department officers arrested Hao Jun once again. On September 4, the Junchuan District Court sentenced him to four and half years' imprisonment. Mr. Hao was first imprisoned at Lanzhou Prison in December, but in March of the following year, he was taken to the No.2 Squad of the Fifth Brigade of Wuwei Prison for further persecution. Because he refused to give up his practice, the prison guards forced him to do intensive labor. Mr. Hao refused to cooperate and was forced to hold a hunger strike to protest the persecution. In revenge, the guards hung him up, but Mr. Hao managed to escape the handcuffs and shout, "Falun Dafa is good." His righteous actions stunned the guards.

After the extended mental and physical persecution, Hao Jun suffered sciatica in June 2005. He often could not stand up after squatting down.