Switzerland: "I Hope You Won't Need to Come Here for This Reason Next Year" (Photos)

From January 23 to 28, the annual World Economic Forum convened at the famous Swiss ski resort, Davos. Some practitioners clarified truth to forum participants and media and exposed the Chinese Communist regime's brutal persecution of Falun Gong to tourists and local residents. In addition, they attended an event sponsored by the Epoch Times newspaper in support of more than 7.5 million people withdrawing from the CCP (Chinese Communist Party).

Since the Epoch Times published their editorial "Nine Commentaries on the Chinese Communist Party" at the end of 2004, more and more people started to understand the CCP's evil nature. The persecution by the CCP of Falun Gong practitioners who believe in "Truthfulness, Compassion, Forbearance", which has now lasted for more than six years, is the strongest evidence that it persecutes good people. 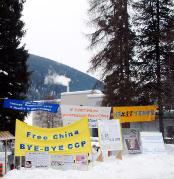 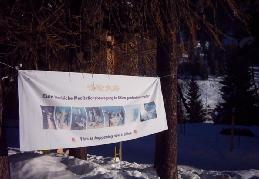 The practitioners' banners drew the attention of many people. The pictures showed the torture Falun Gong practitioners endure gave details on specific cases. A lot of people expressed that they couldn't imagine or understand how this inhuman thing could still be happening today. Just as in previous years, the media took pictures of the information stand, as well as the practitioners' Falun Gong exercises demonstration.

After viewing all the torture exhibition pictures on the roadside, a lady went to the information stand and asked, "Do you collect signatures? I want to sign. I will sign my name on any petition of yours. This is too brutal."

Since 2003, Falun Gong practitioners have set up information stands every year and distributed leaflets. In 2005, they held an anti-torture exhibition. Many local people have understood the truth about Falun Gong. The practitioners recommend them to read the "Nine Commentaries on the Chinese Communist Party" so as to have a better understanding of the real reasons why the CCP persecutes Falun Gong: The evil CCP's deceptive, wicked and violent nature dictate that they cannot tolerate people living according to truthfulness, compassion and forbearance, nor tolerate people having their own beliefs. While signing to support the withdrawal from the CCP, a gentleman said, "I also signed my name last year. I'll sign my name every year."

This activity lasted for a week. As a result, during the last several days many passersby would say that they already had a leaflet and that they had already signed their names. Some would tell us, "I've read through the material." When a lady was asked if she would like to sign in support, she said, "I've signed already. But if it were possible, I would like to sign ten times."

"Jiang Zemin should go to jail"

A local elderly woman spoke with the practitioners many times. On the last day, she pointed to the picture of Jiang Zemin and said, "This person is so bad and being sued in so many countries in the world. Why isn't he in jail?" The practitioner told her that because Jiang Zemin hides in China and China is still being controlled by the Chinese Communist Party. The elderly woman continued, saying, "Then you should let all China's neighboring countries know Jiang's crimes so that he would be arrested if he ever leaves China."

Many people told the practitioners, "You've done well. I support you. Keep it up!" Some people gave snacks to us. A gentleman said: "I know the CCP violates human rights. What you have done is great and I support you. But I hope you won't need to come here for this reason next year."