(Clearwisdom.net) Falun Dafa practitioner Mr. Yang Lidong from Songyuan City, Jilin Province had been tortured long term in the Jilin Province Labor Camp in Jiutai City. He could not take care of himself and was dying when released. He died on January 17, 2006, thin as a skeleton, and a tragic sight to see. 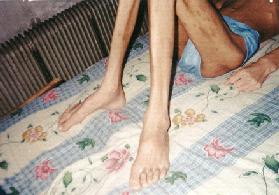 Photo taken on July 5, 2004, the true image of him after being tortured.

Mr. Yang Lidong was 35 years old, and lived on Tuanjie Street in Songyuan City, Jilin Province. He started practicing Falun Dafa in April 1999, and refused to give up his faith after the CCP's persecution began on July 20, 1999. He had been sent to forced labor twice in the Yinmahe Labor Camp located in Jiutai City.

In May 2000, Mr. Yang Lidong went to Beijing to appeal for Falun Dafa, and was arrested and detained in the Songyuan City Detention Center, where policeman Zhang Shuhuai ordered prisoners to whip him 99 times with a two foot long, four inch diameter plastic tube, causing his flesh to be smashed with many wounds. Mr. Yang was later sent to forced labor in the Yinmahe Labor Camp in Jiutai City, and served a one year term.

When he was in the Second Ward of Yinmahe Labor Camp, Mr. Yang was often tortured with brutal beatings, the Sitting Board (1), forced brainwashing, over-time heavy labor, and an extended six months term.

On February 8, 2002, Mr. Yang Lidong was arrested after policemen from local Tuanjie Street Station ransacked his home, and he was cruelly beaten. He was sentenced to two years of forced labor because he refused to give up his belief, and was sent to the Yinmahe Labor Camp in Jiutai City again on February 11, 2002.

During his second term in the Camp, guards ordered prisoners Zhang Laoqi, Zhu Yonggang, Wang Zhongkui and others to torture Mr. Yang Lidong. They sometimes tied Mr. Yang's four limbs onto the bed, then beat him with a shovel handle or a plastic tube. Sometimes seven or eight people stuffed Mr. Yang's mouth with linen cloth, then beat him with wooden boards, wooden sticks, or plastic tubes. Sometimes these prisoners held his head in their hands, then rubbed his ribs with wooden boards or tooth brushes. Once Mr. Yang shouted "Falun Dafa is good!" to protest the evil persecution. These prisoners then tied him on the bed, and then tilted the bed up-right so that it forced Mr. Yang in a head down position for 30 minutes. The prisoners forced him in certain positions, such as sitting up, or lying down, but not allowing him to move, not allowing him to use the toilet, and forcing him to wet the bed. Sometimes Mr. Yang was forced to sit on the cement floor overnight. Sometimes he was forced to eat less than usual, without any soup.

Only two weeks after Mr. Yang was locked in the camp the second time, he was tortured until he was paralyzed, and could not hold anything with his hands. Even in his impaired physical condition, he was still put in strictly monitored cells.

One day guard Gao Ke and Warden Gao came to patrol the strictly monitored cells, and Mr. Yang Lidong shouted, "Falun Dafa is Good!" Guard Gao Ke was very angry. He pulled Mr. Yang's intravenous injection needle out, and shocked Mr. Yang all over his body. Warden Gao kicked Mr. Yang down to the floor with one kick, and beat him.

Around one month later, Mr. Yang was locked in a broom closet, while guards ordered prisoners Zhang Laoqi. Li Donghong, Liu Wenli, Xie Yunpu, Zhang Mancang, Zhao Xiaoli to torture him. They said to others that they were going to give Mr. Yang Lidong a "massage," but soon after, the whole "Educational Section" could hear the tragic screaming of Mr. Yang, along with guards and prisoners' laughing and shouting. These kinds of tortures had been conducted many times. Finally we learned that each time, Mr. Yang had been locked in the broom closet then had been beaten by sticks, causing him to become incontinent. Then prisoners took Mr. Yang to the water room to have a "bath," but in reality, it was another round of brutal beating. Every time when Mr. Yang Lidong had to use the toilet, other detained practitioners or prisoners were not allowed to go to the bathroom, to prevent them from seeing how Mr. Yang had been tortured. Mr. Yang Lidong had been on hunger strike to protest such brutal torture for more than twenty days.

In May 2002, Mr. Yang Lidong was locked in the Fourth Ward - the Construction Ward. The Camp Administration forced all Falun Dafa practitioners who upheld their faith to have an extended term of five to ten days per month. Mr. Yang Lidong refused to sign his name on the sentencing statement, and as a consequence, guards Guo Yiping and Zhang Xin stripped Mr. Yang and lashed him with a whip of thick twisted wire, resulting in Mr. Yang's flesh being broken, and he was bleeding badly.

In February 2003, Mr. Yang refused to watch a TV program that slandered Falun Dafa and protested the slave labor. He was locked in a small cell (2), and then sent back to the strictly monitored cells ever since. He was strictly monitored and not allowed any personal freedom.

Due to long term mental and physical torture, Mr. Yang Lidong became as thin as skin and bones, and a big boil grew on his back. He could only walk with two-inch-steps, and guards would not allow him to do the Falun Dafa exercises or study the Fa, or receive any treatments.

In the more than one year's time after Mr. Yang Lidong returned home, he had to stay in bed. He could not take care of himself and endured extreme pain every day, plus the local police kept harassing him at his home. One morning in May 2005, at around 4 a.m., several local policemen pounded on Mr. Yang Lidong's door, stormed into the house and ordered Mr. Yang to give up his Falun Dafa books. Mr. Yang's family members refused the unreasonable harassment, and scolded the policemen's rude behavior. The police saw Mr. Yang lying on the bed, as thin as a skeleton so they were scared of being responsible, and quickly escaped after saying some threatening words.

(1) Every day, practitioners put their hands on top of their laps, with backs straight and sit on benches 18 hours per day. This continued for over fifty days. The authorities even limited practitioners' restroom use time. Because of the long time spent sitting on hard benches, practitioners' buttocks grew big sores that hurt badly. Practitioners could not even urinate normally because of the pain. Because the labor camp was very damp, and the police would not allow practitioners to have proper ventilation or the chance to get some sunlight, and practitioners were locked up for so long, countless red scabies grew all over the bodies of practitioners. They were extremely itchy and painful. See case on: http://www.clearwisdom.net/emh/articles/2002/7/29/24631.html.

(2) The detainee is locked up in a very small cell. The guards handcuff the practitioner on his back in a fixed position, in which he can neither move nor lie down. The small cell is very damp and no sunshine comes in. Detainees have to urinate and defecate in the cell. Only half of a regular meal is served to detainees locked up in a small cell during the daytime. During the night the rats run around. The stench in the small cell is so bad that it is difficult to breathe.