(Clearwisdom.net) On the morning of November 28, 2006, Mr. Phil Glendenning, the director of the Edmund Rice Centre for Justice and Community Education, announced at the New South Wales Parliament that the Coalition to Investigate the Persecution of Falun Gong in China (CIPFG) New South Wales Delegation has formed officially, and with other CIPFG delegations, plans to go to China to conduct an investigation of the Chinese Communist Party's harvesting organs from living Falun Gong practitioners. They will do this independently, without the Chinese Communist Party's (CCP) interference. The CIPFG-New South Wales Delegation will implement the 17 recommendations that two Canadian independent investigators, David Kilgour and David Matas, made in their report, including stopping the persecution, jailing and torture of Falun Gong practitioners. The investigation team has already written to Qiu Shaofang, the Chinese Consulate-General of Sydney, requesting a meeting to discuss and arrange details of the trip to China. 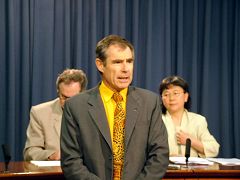 Dr. Arthur Chesterfield-Evans, the leader of the NSW Democrat party and a member of the Legislative Council, hosts the press conference.

Dr. Arthur Chesterfield-Evans, the leader of the NSW Democrat party and a member of the Legislative Council, hosted the press conference. He said that the harvesting of organs is against basic human rights, and there is much evidence substantiating the reliability of this allegation, which is the reason that the CIPFG needs to conduct an investigation in China.

Mr. Glendenning said that there are multiple reasons for CIPFG to investigate in China. The main reason is that David Kilgour and David Matas listed 18 pieces of evidence in their report to verify the allegations. Since 1999, Falun Gong practitioners have been persecuted by the CCP as "enemies of the state". Many reliable documents also show that thousands of practitioners have been jailed since the beginning of the persecution.

Mr. Glendenning also said that the CCP had denied the allegations, but last week the CCP admitted that most organs for transplant in China are from executed prisoners. Obviously the CCP is being deceitful, and is trying to deny the organ harvesting from Falun Gong practitioners in a different way. The truth is that the number of organ transplants has been increasing along with the escalation of the persecution against Falun Gong. When we analyze all the evidence together, we must question the Chinese Government regarding this serious issue. Other governments around the world should also help to stop the CCP's crimes.

Mr. Glendenning said that the Australian CIPFG Delegation has finished the preparatory work to go to China. The purpose of this action is to carry out the 17 recommendations in the Kilgour-Matas report, including the 10th-- calling for an immediate halt to the repression, imprisonment and severe mistreatment of Falun Gong practitioners; the 15th--for every organ transplant, both the donor and recipient should have official approval from a government supervisory agency before the transplant takes place; the 16th--organ harvesting from executed prisoners should cease immediately; and the 17th--commercialization of organ transplants should cease; organs should not be for sale. Mr. Glendenning hoped that all governments will treat these recommendations seriously.

A letter from a Green Party Member of Parliament was read at the press conference, showing Green Party support for the investigation.

Mr. David Kilgour and Mr. Edward McMillan-Scott, Vice President of the European Parliament, exposed the CCP's harvesting organs from living Falun Gong practitioners in speeches given in Australia. The CCP's crimes have shocked Australian society. Political parties in Australia have requested the CCP to allow the international community to conduct independent investigations. The CIPFG-Victoria Delegation was formed on November 24, 2006.