(Clearwisdom.net) On Christmas Eve, Falun Gong practitioners in Singapore went to Orchid Road as they have done in previous years to clarify the truth to people. They told the public about the Chinese Communist Party’s (CCP) inhuman persecution of Falun Gong, the CCP harvesting organs from living Falun Gong practitioners for sale, and the murdered bodies of practitioners being cremated to destroy the evidence. At the same time, they told the public about the fact that with constant exposure of the CCP’s atrocities, plus the wide spread of the Nine Commentaries on the Communist Party, the Chinese people are being awakened, and many Chinese people have quit the CCP and its affiliated organizations. People in many countries around the world have held a variety of activities to support this trend. The number of people who have withdrawn from the CCP and its affiliated organizations has exceeded 16 million, and the number is increasing each day. 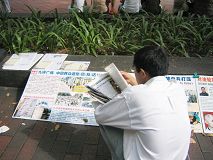 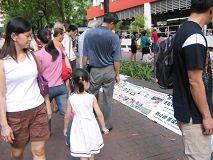 Singapore Falun Gong practitioners will continue clarifying the truth to the public until the CCP’s persecution of Falun Gong ends and the Singapore authorities stop acting as an accomplice to it.

“"Feitian" Travel with Me”