After Her Husband and Son Died, Lu Peilan, 78, from Shandong Province Also Died as a Result of Persecution (Photo) 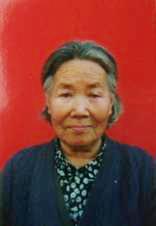 In 1999, Jiang and the CCP started persecuting Falun Gong. Ms. Lu's family had no peace because they firmly kept their faith. Village CCP Secretary Dong Qiaoshan (male), Neighborhood Administrator Zhang Xia (female), and Town Deputy Head Yu Yansheng forced Ms. Lu to write a "guarantee letter" to stop studying and practicing Falun Gong. Because Ms. Lu was illiterate, they write the letter for her and then forced her to press her fingerprint onto it. The village hired several dozen people to closely watch the practitioners in the village and made practitioners pay them 40 yuan every day. Three practitioners in Mr. Dong Zhenhe's family, plus his six- or seven-year-old granddaughter, were all confined in the house. In August 1999, Town CCP Political and Judiciary Committee Secretary Chen Jiazhi (male) arrested Mr. Dong Zhenhe secretly.

Policemen ransacked their house many times and arrested their second son, Dong Yuehua, five times in the past six years. Their first son, Dong Yuezhong, used to practice Falun Dafa before July 20, 1999. But after the persecution began, he could not bear the pressure from his employer and the Neighborhood Administration, so he wrote the guarantee statement saying he would stop practicing Falun Dafa. He suffered a stroke in the summer of 2000 and could not take care of himself. He started to study Falun Dafa again, quickly recovered, and could once again walk on the street. But under the cruel attacks from the Party, he died on February 9, 2001. Mr. Dong Zhenhe also could not bear the brutal persecution, so his old sickness recurred at the end of 2003, and he died on February 26, 2004.

On the afternoon of February 1, 2005, more than ten policemen, led by Li Fachen, arrested Mr. Dong Yuehua from Longcheng Market. At the same time, more than ten policemen, led by Zhou Zhong, ransacked his home. They found one set of teaching tapes and one Dafa book. Policeman Zhou Zhong said, "We have arrested Dong Yuehua and detained him in the detention center, and these are proof of his crime. Dong Yuehua's wife said, "This is what has kept my mother-in-law alive. My mother-in-law had so many diseases, and they were all cured by studying Falun Dafa. You cannot take these away from her." The policemen ignored her. Mr. Dong Yuehua was cruelly beaten by Detention Center Head Sun Liji such that Mr. Dong's face was deformed due to the brutal beating. Ms. Lu Peilan was so frightened she appeared to have a nervous breakdown.

Over the past several years, so many of her family members have been tormented and died as a result of the persecution. Ms. Lu Peilan also died on October 22, 2006.

“We Need to Use Discretion in Money Matters among Fellow Practitioners”