Australia: Legal Case against Foreign Minister Downer Closed with His Guarantee for No More Certificates, and Payment of Lawsuit Costs (Photos)

(Clearwisdom.net) On the morning of December 14, 2006, the one-and-a-half-year-long lawsuit against Foreign Minister Alexander Downer was closed with Mr. Downer's promise to not sign any more certificates restricting Falun Gong practitioners' use of banners in peaceful protests, and payment of $20,000 in costs. The practitioners filed the lawsuit against Mr. Downer for his abuse of power in signing certificates to restrict practitioners' use of banners and music to protest in front of the Chinese Embassy in Canberra. 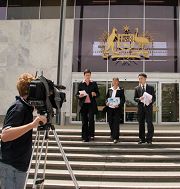 Around 10:00 a.m. on December 14, Judge Ken Crispin of the Australian Capital Territory (ACT) Supreme Court issued a final verdict on the legal case against Foreign Minister Downer. The judge said that defendant Downer promised not to continue signing the certificates restricting the Falun Gong practitioners' peaceful protests in front of the Chinese Embassy. He stopped signing the certificates since March of this year and submitted a guarantee statement to the court. The judge thought that the guarantee statement has a similar effect to the court order, and defendant Downer's promise is better than the court order to stop the signing of certificates to restrict practitioners' peaceful protests. Falun Gong practitioners can now protest the Chinese Communist Party's (CCP) violation of human rights freely without any restrictions. The judge ruled that defendant Downer pay the whole cost of $20,000 and the case is closed.

Mr. Downer fails to provide evidence and proposes to settle outside of court

Ms. Kay Rubacek, Falun Gong spokesperson, said that people with a sense of justice need to expose the CCP's brutal persecution of Falun Gong practitioners in China and should not yield to the CCP's pressure. The high court held many hearings and asked Mr. Downer to provide evidence for his exercising his power as foreign minister in issuing the certificates. The plaintiffs' lawyer Bernard Collaery said that Downer was unable to provide the evidence for his allegation. Furthermore, former Chinese diplomat Chen Yonglin revealed that some people in the Australian Foreign Ministry had an agreement under the table with the CCP. Mr. Downer realized that he would face suspicion from the public about his behind-the-scenes agreement. In March this year, he stopped signing the certificate and proposed to settle outside of court and pay all court costs in exchange for not appearing in court and having to reply to the court for evidence of his misuse of power. The Falun Gong practitioners' side did not agree to an out-of-court settlement, because they believed that Downer's motivation was to avoid the court's investigation and that he did not have any real intention to stop signing the certificate.

Court verdict: People in a democratic country like Australia have the right to protest human rights violations

In the court verdict, the judge confirmed that in a democratic country like Australia, people have the right to protest human rights violations. He mentioned in the verdict that first-hand information and various investigation reports demonstrate that Falun Gong practitioners are persecuted in China. The persecution is a concerning issue. He specially mentioned that he was moved by the death of the first plaintiff Dai Zhizhen's husband due to torture by the CCP regime.

She said, "Because we think that it is not enough for Downer to stop signing the certificate, he needs to be responsible for his wrong decision over the last four years. The court should rule that all the certificates he signed are now void. Since each certificate was valid for only 30 days, the judge thought that our request did not have much meaning. So the judge ruled that Downer would not sign the certificate but pay $20,000 in costs. The ruling does not meet our request. Thus, to have Australia not incur a regrettable loss in the history of the 21st century, we will continue to seek legal assistance to make Australian society know that Downer's mistake cannot be corrected by a $20,000 payment."

Ms. Rubacek said that the whole world has been shocked since the exposure of the CCP's crimes of organ removal from living Falun Gong practitioners, and the release of the independent investigation report by Canadian international human rights lawyer David Matas and David Kilgour, former Secretary of State (Asia-Pacific) for Canada. Recently, members of Parliament from several parties joined the Coalition to Investigate the Persecution of Falun Gong (CIPFG) and wish to thoroughly investigate the CCP's crimes of organ removal from living practitioners. Facing their righteous actions, Mr. Downer should be clear that he stood on the side of the evil CCP. Freedom, democracy and human rights are universal values for western society. Commerce and trade cannot override human rights.

Ms. Rubacek discussed the background for the practitioners' lawsuit. In order to safeguard basic human rights, Falun Gong practitioners in Australia gathered in front of the Chinese Embassy and held banners calling for an end to the CCP's persecution of Falun Gong in China. On March 16, 2002, one day before Chinese Foreign Minister Tang Jiaxuan visited Australia, under the CCP's pressure and using his power, Foreign Minister Downer signed the first certificate to restrict practitioners displaying banners in front of the Chinese Embassy. The stated reason was that practitioners' banners and music violated the dignity of Chinese delegations and the Embassy. Since then, Downer signed the certificate each month.

For years the practitioners attempted to have dialog with Foreign Minister Downer in order to solve the issue, but did not get any response. The practitioners sought help from the Human Rights and Equal Opportunity Commission. President John von Doussa suggested that the practitioners seek legal means to stop Downer's signing the certificate. Thus, on June 8, 2005, practitioners Zhang Cuiying and Dai Zhizhen brought a lawsuit against Mr. Downer in the ACT Supreme Court and requested the court to order Downer not to sign similar certificates.