Korea: Parade in Shuiyuan City Recognizes and Supports the Fifteen Million Chinese Who Have Renounced the CCP (Photos)

(Clearwisdom.net) On November 26, 2006, Capital Area Assistance Center of the Falun Dafa Association of Korea organized a large parade in Shuiyuan City to recognize and support the 15 million people who have quit the Chinese Communist Party. Shuiyuan City is located to the south of Seoul and has a population of about one million people. Many Chinese live in the area. 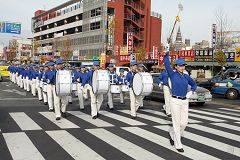 Divine Land Marching Band in the streets of Shuiyuan City

During the process of applying for a parade permit, many police officers who had learned the truth provided a lot of help. Many Chinese viewed the picture displays exposing the Chinese Communist Party's persecution of Falun Gong, including the organ harvesting atrocities revealed this year. Many expressed anger at the atrocities. One Chinese said, "We all know the Chinese Communist Party is bad, but we can't say it in front of its face." His words exposed many Chinese people's attitude toward the CCP and also displayed the frightening atmosphere under CCP rule.

The Falun Dafa practitioners clarified the truth to groups of Chinese people. Some of them hesitated if they should quit the CCP too. Eleven people decided to quit the Chinese Communist Party on the site.

The spokesperson of Falun Dafa Association of Korea read a statement to support the 15 million Chinese people who have openly announced to quit the CCP. After the statement, the Divine Land Marching Band began to perform. The environment was filled with compassion and was solemn. When people were listening to the music, the cloudy sky turned brighter.

After the parade started, many people stopped to watch the Divine Land Marching Band's performance. Police controlled the traffic to let the procession march through intersections.

When the procession arrived at Shuiyuan Plaza, practitioners started to pass out fliers and clarified the truth with righteous thoughts. The plaza soon filled with condemns of Chinese Communist Party.

An senior citizen from the countryside watched the performance and said it was the most wonderful performance he had ever seen in his life. He postponed his departure and watched until the performance ended. In the end, he walked to the director of the band and said that he was so moved that he couldn't find the right words to express his feelings. The practitioners and residents were very moved too.

The activity completed successfully at 4 p.m.