Holland: Truth Clarification Photo Exhibit in front of the Peace Palace in The Hague (Photos)

(Clearwisdom.net) Dutch Falun Dafa practitioners have been holding Falun Gong’s truth-clarification photo exhibit in front of the Peace Palace in The Hague every Sunday. The Peace Palace is the place where the International Court of Human Rights is situated, which is the symbol of defending the world’s human rights and justice. This famous tourist attraction in Holland attracts people from various places around the world. With the photo display, more and more people come to know the facts about the persecution of Falun Gong. In particular, many tourists from China have overcome their fear of the Chinese Communist regime to further understand the facts about Falun Gong. 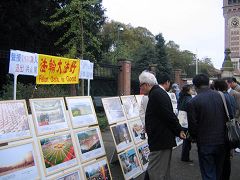 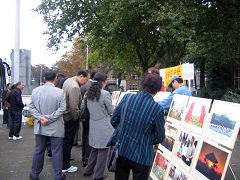 Tourists from around the world view the photos displayed

After 10:00 a.m. on the morning of October 22, 2006, some tour buses arrived one after another. An older Christian from Spain said after viewing the photos, "I have read the materials about Falun Gong in Spain. I really hope the persecution can be stopped as soon as possible. God bless you!"

Shortly, a bus load of Korean tourists came to the spot from France. As soon as they were taking pictures in front of the Peace Palace, some of them were attracted by the beautiful Falun Dafa music of "Pudu" and "Jishi." They came to the display boards and talked to practitioners, "We have come across Falun Gong practitioners in South Korea. We were touched by your being steadfast in your beliefs. May I have a picture taken with you in front of the International Court of Justice?" The practitioner said "Certainly," and he gave them some Falun Dafa bookmarks. They accepted the bookmarks happily and said that they would visit the website on the bookmark to learn more about Falun Gong.

When two female Chinese students studying in Holland stopped by, they were surprised to find two Dutch people practicing the Falun Gong exercises. They yelled out: "Look! Westerners are practicing Falun Gong." They took out their cameras to take pictures of the practitioners. One of them said to herself: "This is quite a scene at the Peace Palace."

At about noon, a German tour bus carrying a group of tourists from China arrived at the Peace Palace. After the photo session, one of them asked a practitioner, "Why don’t you practice the exercises at home as opposed to practicing here?" The practitioner replied, "Because this cultivation practice is really good, we want to share it with more people." The tourist continued, "Why do you go to Tiananmen Square to make trouble?" The practitioner said, "We have never made any trouble, and what we have done is nothing but explaining the facts of the persecution. The allegation of making trouble is a lie fabricated by the Chinese Communist regime." The tourist said, "Why do practitioners commit suicide?" Knowing that this tourist had been deceived by the Chinese Communist's regimes propaganda of the Tiananmen Square Self-Immolation incident making Falun Gong practitioners appear to be people who commit suicide, a practitioner handed him a VCD explaining the facts about the Tiananmen Square self-immolation incident and said, "It is a predestined relationship that you meet us here. Please view this VCD yourself at home, and you will understand what is really going on." In the meantime, seeing a mid-aged woman hesitate to take the truth clarification materials prepared by practitioners, a practitioner explained the truth to her. Finally the woman overcame her fear, and took the materials at ease.

When a practitioner was explaining the facts about Falun Gong to a person from China, the Chinese person repeatedly nodded his head and whispered to the practitioner, "I support you. Go on with your good work." Although the Chinese Communist regime has been trying very hard to block information from the outside, it will never bar kind-hearted people from learning the truth. Instead, more and more people have come to understand the facts about Falun Gong. As a matter of fact, it is Falun Gong practitioners’ common wish that more and more people are able to support this wonderful practice.