(Clearwisdom.net) On November 11, 2006, the annual Veterans Day Parade was held on Fifth Avenue, from 23rd Street to 59th Street in New York City. The Veterans Day Parade tradition started in 1929, and now, more than 20 thousand people attend the parade every year. The Falun Gong group, consisting of the Divine Land Marching Band, exercise demonstrations, celestial maiden dancers, lion dancers and a waist drum team, also took part in the parade and was welcomed by the spectators. 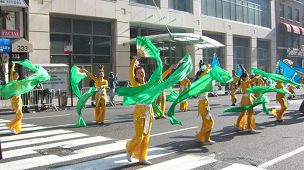 It was the first time for the Divine Land Marching Band to attend this parade. The band, which consists mostly of Chinese practitioners, amazed the spectators. People applauded for the band and shouted, "Falun Dafa!"

The exercise demonstration group was made up of practitioners from different countries, showing how Falun Dafa has spread throughout the world.

Mrs. Meixue, who was the leader of the celestial maiden dance group, waved to the spectators. When they passed by the main stage, the MC handed Mrs. Meixue the microphone and she said to all the spectators, "Falun Dafa is good!"

The lion dancing was also very welcomed as the spectators applauded it. The waist drum playing brought another aspect of traditional Chinese culture to the parade.

One practitioner told the reporter: "This is the third time for Falun Gong practitioners to attend the Veterans Day parade. New Yorkers have welcomed us. Many people took photos and video recordings of our performance. Falun Gong practitioners used to hold an anti-torture exhibition on Fifth Avenue every day, clarifying the truth of the persecution against Falun Gong by the Chinese Communist Party, hoping for New Yorkers to support us. We also attended many parades on Fifth Avenue, bringing the beauty of Falun Gong to New Yorkers. Our goal for all the activities we have taken part in over these past years is to clarify the truth of Falun Gong to people. We hope that more people will stand up to help end the persecution."

“Experience Sharing Conference Held in Hong Kong: Practitioners Focus on How They Study and Cultivate (Photos)”