(Clearwisdom.net) The US West Autumn Falun Dafa Cultivation Experience Sharing Conference was held on October 22, 2006, at the Masonic Center in San Francisco. Sixteen hundred practitioners from around the world attended the conference, and 23 Western and Chinese practitioners, including five young practitioners, came to the stage to make speeches. 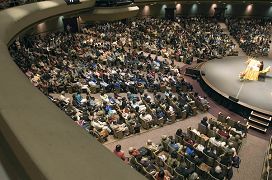 The Fa conference began at 9:20 a.m. and concluded at 5:30 p.m. Some of the speakers talked about the importance of spreading the Nine Commentaries and encouraging the Three Withdrawals (from the Chinese Communist Party, the Youth League, and the Young Pioneers) in saving sentient beings, while others shared their understandings on how to look within, strengthen righteous thoughts when encountering obstacles or conflicts in doing different truth clarification projects, and how, when practitioners form a whole entity, the mighty Fa power will manifest itself. Some shared their experiences of obtaining the Fa and the changes in their views on life after practicing cultivation.

Helen from Los Angeles talked about the urgency and importance of spreading the Nine Commentaries and encouraging the Three Withdrawals in order to rescue more sentient beings. She also shared how to look within and think of others first as what a cultivator is supposed to do when he or she encounters conflicts coordinating and arranging work on different projects. She talked about how to strengthen communication and exchange opinions among coordinators when they were short of hands. She said, "The crucial issue is not the demand of the job itself, but whether or not the state of practitioners has reached the requirement of Dafa, whether or not the practitioners have let go of all kinds of attachments and considered from a holistic point of view how to harmonize the requirement of Dafa."

Western practitioner Genevieve from San Francisco realized that the media is a very powerful tool in truth clarification. She shared her experience of participating in media work. She said that if more people read our newspaper, they will learn about the truth of Falun Dafa. When she decided to work for the English version of The Epoch Times newspaper, she met with very big tribulations. She also experienced two traffic accidents. But she thought of Master's Fa, "When it's difficult to endure, you can endure it. When it's impossible to do, you can do it." (Lecture Nine, Zhuan Falun) In order to help more people learn about the truth, she persisted no matter how busy or tired she was.

Yaqin from San Francisco shared her experience of practicing cultivation over the past five months. She started paying attention to Falun Gong ever since the "April 25" event. Prior to her cultivation, she suffered from serious stomach problems, high blood pressure, and other serious illnesses. This May, her illnesses relapsed and were more serious than before. With no alternative, she thought of Falun Gong. She started doing the Falun Gong exercises the afternoon of May 18, 2006. Several days later, her serious illnesses disappeared all of a sudden. Her leg pain was also gone, and the edema in her legs and all over her body resolved. She could find no words to express her gratitude to Dafa. Now she spends several hours every day riding a vehicle to Chinatown to clarify the truth about Falun Gong.

Sixty-year-old Western practitioner George came from San Diego. He said that before obtaining the Fa, he had a good job, good family life, and all the things most people hope for in life, yet he had not discovered much meaning to life. He believed in God when he was young, but the Bible did not answer many of his questions. His son, who studied Chinese, started to practice and introduced it to him. Since this past February, after he attended the Los Angeles Falun Dafa Cultivation Experience Conference, he has read Falun Gong books every day and become more even tempered. He now knows the meaning of life, and said that only Dafa could make all this possible. Now he understands that he should clarify the truth to the world's people, telling them about the persecution of Falun Gong in China. 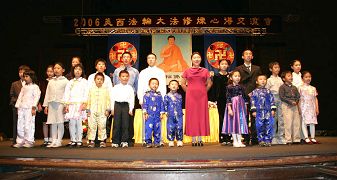 Over a dozen young practitioners recited Master's poems from Hong Yin. Five of them shared their experiences in studying the Fa and cultivating their xinxing.

Fifteen-year-old practitioner Shang talked about her cultivation experience in the Divine Land Marching Band. She had a lot of homework to do, but she was still able to guarantee the time for studying the Fa. She was very busy, but she was still able to get good results whenever she studied. She plays the piccolo, and she was able to learn to play "Falun Dafa is Good" and "Beautiful America" within two and a half days. She enlightened that only if she gives top priority to Dafa will she have time to do her homework and get good results.