Finland: Exposing the CCP's Crimes to the Finnish People and the Government of Finland (Photos)

(Clearwisdom.net) Finland is this year's "president country" of the EU. It is a rotational position. The human rights dialog between the EU and China will take place in Bejing soon. On October 14, 2006, practitioners in Finland gathered again at a corner of the Helsinki train station to expose the cruel persecution of Falun Gong committed by the Chinese Communist regime over the past seven years, especially the atrocity of illegally harvesting organs from living practitioners. 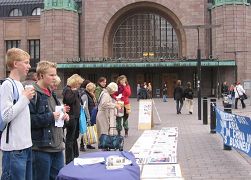 Falun Gong practitioners have conducted truth-clarification campaign several times. A great number of people have been interested in understanding the details each time. 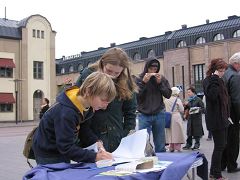 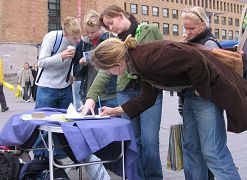 Passers-by were indignant at the CCP's atrocities and gave their signatures one after another. 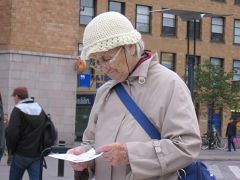 After attentively reading the truth-clarification materials on Falun Gong, this older lady said to practitioners, "Don't keep silence. We support all of you."

Many large photos depicting how Falun Gong practitioners have been tortured attracted passers-by to stop and look. Some of them took the truth-clarification materials and read them right away. Others attentively read the exhibition boards placed on the ground. Some seemed to already know the facts and went directly to the petition table to give their signatures in support of the anti-persecution campaign. Young people, teenagers, and the elderly were all represented.

An older lady carefully read the truth-clarification materials and exhibition boards and said to practitioners, "You shouldn't keep silence. You need to protest. You have my support." She then went to sign the petition form.

I asked a practitioner, Mrs. Chen, "Why do you come here?" She said, "Before the human rights dialog between the EU and China, I'd like to tell the local people and the government of Finland: When the Chinese government say, 'Now is the best period of human rights in China,' that is a lie. It is total propaganda. I can say this from personal experience. For a long time, the CCP has attempted to extend the persecution of Falun Gong abroad. My husband has a doctorate degree and works as a researcher at a research institute in Helsinki. Recently we sent our passports to the Chinese embassy for an extension. The embassy illegally confiscated our passports, so that we are now persons without passports. The staff of the Chinese embassy asked us to guarantee that we wouldn't take part in any more protest campaigns. We said, 'If the CCP stops the persecution, we wouldn't to protest'. They were speechless but deprived us of our right to be Chinese citizens. Our parents have no jobs in China right now, and their health is not good. We can't return home to visit them due to the persecution. Chinese special agents persecute not only Chinese Falun Gong practitioners but also Western practitioners. Recently they harassed some Western practitioners in Finland over the phone, seriously affecting their normal lives. In the face of the CCP's persecution, why can't we protest?"